Twice is coincidence. The third time it's enemy action. Bill Clinton's at it again, calling the opposition terrorists.

Again. I know, I know - the Leopard can't change his spots, and all that. But it's not just him. The head of the FBI said pretty much the same thing, and who can forget the Department of Homeland Security (Kabuki)'s report from last year?

And so, I'll extend my offer from last year. Anyone who wants to use this image on their blog is welcome to it. Links back are always appreciated. 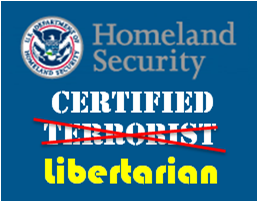 Image credit: Borepatch. Released to the Public Domain.
And what is it with the Democrats, questioning my patriotism?

Heh. Your influence is changing teh Intarwebz for the better.

Your image & link will go up on my blog later.

The thing about that DHS report that always bugged me the most is that it reads like a moron wrote it. I'll be charitable and say it looks like an 8th grader's assignment done in 15 minutes before turning it in. Compare that to an older Bush-era report on left-wing threats, where every claim is footnoted, and It looks even more pathetic.

We troublemakers have to stick together, Borepatch.

Thanks for sharing your work.

Thanks for the use of your graphic.

When was that Hillary quote said?