What happens when you subsidize solar power?

Spain has a set of policies in place to encourage the spread of solar power generation. The result is that companies selling electricity to the grid get a higher price per kilowatt-hour if the power was generated by solar panels. The result is exactly what you'd expect - people use electric lights to generate "solar" power at night (machine translation from the German):

After press reports, it was established during inspections that several solar power plants were generating current and feeding it into the net at night. To simulate a larger installation capacity, the operators connected diesel generators.

"This is just the tip of the iceberg," said one industry expert to the newspaper "El Mundo", which brought the scandal to light. If solar systems apparently produce current in the dark, will be noticed sooner or later. However, if electricity generators were connected during daytime, the swindle would hardly be noticed.

The Two Things explains economics (and other fields), in a way that the Spain.Gov hasn't learned:

One: Incentives matter. Two: There’s no such thing as a free lunch.

European wind farms are a sunk cost. Quite literally.

Hundreds of Britain’s offshore wind turbines could be sinking into the sea because of a design flaw. It is believed the concrete used to fix some turbines to their steel foundation can wear away, causing the power generators to drop a few inches. The fault was first discovered at the Egmond aan Zee wind farm in the Netherlands and affects those with single cylinder foundations.

Green power really is renewable, in the sense that it needs renewing when it sinks into the sea.

But I'm sure that the Government will manage our health care better than this.

Fewer women dieing in childbirth seems to be bad news

The medical journal The Lancet* has a new study out showing that the death rate for Third World women from pregnancy- and childbirth-related causes continues to drop. You'd think that this would be good news, but then again, you're probably not a professional advocate for women's health:

But some advocates for women’s health tried to pressure The Lancet into delaying publication of the new findings, fearing that good news would detract from the urgency of their cause, Dr. Horton said in a telephone interview.

“I think this is one of those instances when science and advocacy can conflict,” he said.

Dr. Horton said the advocates, whom he declined to name, wanted the new information held and released only after certain meetings about maternal and child health had already taken place.

“People who have spent many years committed to the issue of maternal health were understandably worried that these figures could divert attention from an issue that they care passionately about,” Dr. Horton said. “But my feeling is that they are misguided in their view that this would be damaging. My view is that actually these numbers help their cause, not hinder it.”

Never mind the science, we have a World To Save™! The similarities to the Anthropogenic Global Warming hypothesis are purely coincidental.

* Yeah, I know it's The Lancet. Take it all with a grain of salt, although at least this time they look like they resisted political pressure.

It seems that the west - specifically the Moral Titans running the EU, UK, and US governments - threatened to cut off aid to Third World countries that didn't support last December's Copenhagen Accord climate treaty:

Climate aid threat to countries that refuse to back Copenhagen accord

The pressure on poor countries to support the US, EU and UK-brokered Copenhagen accord came as 190 countries resumed UN climate talks in Bonn in an atmosphere of mutual suspicion.

“The pressure to back the west has been intense,” said a senior African diplomat. “It was done at a very high level and nothing was written down. It was made very clear by the EU, UK, France and the US that if they did not back them then they would suffer.”

And the evidence of the threat being carried out is here:

Yesterday it emerged that the US is to cut climate aid to Bolivia, Ecuador and other countries who have refused to sign up to the accord. But the outgoing UN climate change chief, Yvo de Boer, said: “Bolivia is losing $2.5m in climate funds. That’s about what the presidential palace pays for toilet paper a year. Bullying is not an effective instrument.”

But remember, you are the racist hater. And the UN hasn't given up after the disastrous Copenhagen meeting; they're back in Bonn, preparing for the upcoming December re-do in Cancun:

It's all peer-reviewed science, except for the 30% that isn't 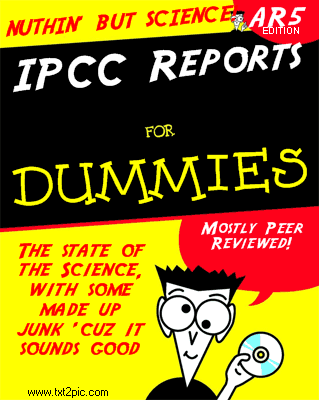 Image credit: Borepatch
Remember the UN's IPCC climate report? Remember that it was the Last Word in our scientific understanding? Remember how it was all rigorously peer-reviewed? Oops:

As usual, it’s honest volunteers who have conscientiously tested the IPCC by going through 18,500 references. And the final total? Fully 5,600, or 30%, of their references are not peer reviewed.

Once again, it's a bunch of Internet amateurs who have had to fact check the Climate Scientists. I guess the UN science budget isn't high enough to pay for quality control.

Snark aside, there's a point to this:

So why bother tallying them up? It’s the IPCC who made this point matter. They are the ones who market themselves as being holier-than-thou, as superior experts who only use peer reviewed evidence. Peer-review has been their gate-keeper: On the one hand they “own” the journals and simply reject contrary viewpoints, and on the other, they’ve convinced much of the less science-savvy world that peer-review matters and is a mark of quality. Their bluster is almost totally based on the fallacious argument from authority, and backed up by a few half-truths.

Every time the IPCC have spat on a scientist with “that’s not peer reviewed”, they have set themselves up to look like duplicitous fools when caught relying on student theses, magazine articles, and boot cleaning guides.

Hey you Deniers - get off my lawn!
Posted by Borepatch

I envy the European ideal and wish we could emulate it here in the U.S. They are so much smarter/better than we are.