It must have been one of those "Assault" Swiss Army Knives 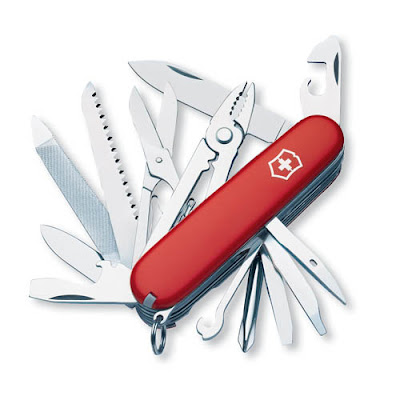 With a bayonet lug and a pistol grip, or something:

A disabled man who kept a Swiss Army penknife in his car to cut up fruit on picnics, has been landed with criminal record for possessing an offensive weapon.

Full time carer Rodney Knowles kept the knife in his glove compartment of his vehicle.

The 61-year-old, who walks with the aid of a stick, was stopped by police on suspicion of drink driving - he was below the legal limit - but officers found the knife in a pouch in the car's glove box.

Knowles, from Buckland, Newton Abbot, Devon, said:"It's a stupid law. Now I have a criminal record."

From the place where Great Britain used to be.

Hat tip: The Drawn Cutlass. He's basically doing all my blogging for me now ...
Posted by Borepatch

You have to wonder if the British will EVER reach the point where they will say ENOUGH... or if its just too late.

*laughs* Thanks for the compliment. I wish I could do the in-depth analyses you do on the climate and computer security; instead, I just link stupid stuff and photograph plates of barbecue. Not in the same league at all.

But don't good BBQ beans contribute to global warming, what with all the excess gas and stuff?

A pen knife? Betcha there wasn't a corkscrew...

...which would have reclassified it from "weapon" to "wine opener".

I wish I could be skeptical of articles like these.