The fabric of society 2

The first principle is that you must not fool yourself and you are the easiest person to fool.

1804 was a bad PR year for Napoleon Bonaparte. In March, he had sent French Dragoons across the Rhine into sovereign German territory to kidnap Louis Antoine, Duke of Enghien, bringing him to Paris to be tried on trumped up charges of conspiracy and then executed. A European aristocracy who had breathed a sigh of relief that Napoleon had leashed the French Revolutionary Terror instantly became implacably opposed to his rule. While he was able to conquer for a while, he was unable to hold his gains in the face of their continuing resistance. As Talleyrand is said to have explained, It was worse than a crime; it was a blunder.

Napoleon's hubris - his belief that he could exercise power with fewer and fewer restraints was a blunder.  We see this in our own day.  The War On Drugs has led to the militarization of the police forces.  It has led to an ever increasing ratchet of police use of force - including deadly force.  It has led to an "us vs. them" mentality, as police forces face increasing criticism for this increased use of force.  It has led to "no knock" raids, sometimes at the wrong address.
Yes, there's a lot of opportunistic looting going on right now.  Yes, radical leftist organizations like Antifa are using this as an excuse to spread chaos and fan the flames.
But it's hard to see how this happens without the last 40 years of military police tactics.  There's a real distrust between the citizens and the police, one that did not exist when I was young.
All for a War On Drugs that sees record levels of drug overdose deaths, the sale of narcotics on every street corner in the Republic, and a monstrous black market funding Narco-terrorists (among others).  Can we all agree that the War On Drugs is a blunder?  We can argue later about whether it was a crime. 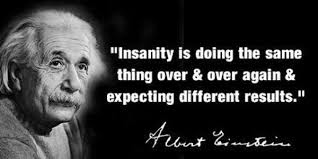 Labels: government cockups, Government power grab, us vs. them, war on drugs

Look at what is happening in Colorado and tell me legalization is the answer.

Look at what's happening in 20+ states where the the National Guard has been called out and tell me that legalization isn't the answer.

Borepatch, I have an ethical dilemma with this sorts of things. On the one hand, I should believe that adults can choose (within reason) what they do with their lives. On the other hand, through personal experience in my family, I know all the horrors that these things bring too in human destruction - plus the simple economic fact that as a taxpayer, I foot the bill for both sides of it, the enforcement and those that use. So what to do?

Absolute agreement. The War on Drugs is and always has been a sick joke. Reagan and George HW Bush ("this scourge will stop") were behind much of this utter stupidity. Now we have local PDs loaded up with military weapons and an eagerness to use them on the citizenry. Insanity.

Wasn't Talleyrand, it was Fouche, Napoleon's Beria that said that.

There are now more illegal drugs in the states that 'legalized' than before. Simple fact is the legal drugs are too expensive. Also, Colorado is being overrun with homeless druggies who are agressively panhandling, sleeping on the streets, etc. Colorado Springs, Denver, Boulder and other 'metro' areas can't/won't do anything.

So you want to end the war on drugs, eh? Cool. Here are the terms of your surrender, and none are negotiable:

- the problems with drugs will become far more widespread. The Infected used needles left in playgrounds will come to YOUR neighborhood, YOUR kids and grandkids will have to deal with it, and whatever power and position you hold in society will not insulate you from it. You personally will face the consequences of your surrender and you or one of your loved ones will pay... probably in blood and tears at some point.

- you will accept far more of the crime culture that comes with it. Nothing will happen without a bribe or gratuity and if you don’t play ball, the boys will come round and help you see things differently... when the swelling goes down. They’ll probably be cops that do it. The cartels will need to get closer to the market and will set up shop right in your back yard. The local two bit hoods you’re dealing with now will be replaced by psychopaths you’ve only read about. They will become the real power brokers in your world and you will bow down to them or they’ll kill you if you want to get stupid about it.

- addiction will become part of the corruption scam. The human derelicts and zombies you enabled will not be seen as irresponsible morons, they will be re-cast by the corrupt ruling class as victims. They will need supervised safe injection sites, free medical care, and other expensive social programs that are thinly disguised pork programs for the usual suspects and their cronies.You personally will foot the bill for that, of course.

- with the war on drugs done with, the war on guns can begin. You see, if you mainstream drugs, the ruling class will have to explain where all the increasing violence comes from. The gang turf wars will heat up as profit margins shrink, and since the big cartels and gangs are even more powerful than before... virtue signalling gun grabbers will need softer political targets. Guys like you and ASM will do nicely, and morons like Aesop will probably carry water for them when they cuck out. You are already dangerous, you are the kind of guy that gets huffy when the goons suffocate random feral monkeys with a knee to the neck.

- There’ll be all manner of other unintended consequences... and you will pay for them too. Or your kids will. We’ll figure that one out as we go!

I've found it baffling for some years now how the federal government can find some rag head terrorist in a cave in Afghanistan but somehow can't find all these drug dealers south of the border. You would almost think someone was in on the joke of importing this stuff and then passing laws that have further debased the Bill of Rights.