I put this post up ten years ago on Father's Day.  It was Dad's last, and while we still had hope we knew that there wasn't much hope left.  He sure liked this post, though, maybe because of that.
Happy Father's Day, Dad.  I sure miss you.  And happy Father's Day to my Father-In-Law Bob.  I'm sorry we won't be coming to see you in Arlington as often now.
Originally posted June 20, 2010.

Maine's Acadia National Park contains all sorts of natural wonders, not least of which is the only fjord on the east coast of this land. It's a proper fjord, carved by the ice sheets and partially flooded by the rising seas at the end of the last glaciation. Called Some's Sound, it's deep, and surrounded by steep mountains on each side. Acadia Mountain is perhaps the steepest of these.

Father's Day 1975 saw Dad, me, and my older brother climbing that mountain. It's only about 900 feet tall, but the climb is pretty vigorous. You go up the landward side, and there's not a lot to see other than trees, and the occasional glimpse of trees on neighboring mountains. Other than the exercise, there's not a lot of reason to make the ascent.

Until you get to the summit, when suddenly you see the Sound laid out before you, in all its glory. 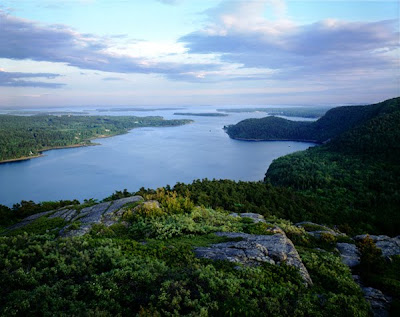 It looks like that the other direction, too. If you have a camera that can take panorama pictures, this is the place to take one. The contrast from deep forest to best-view-in-the-world happens in about five minutes, and makes this a memorable hike.

Father's Day made it a memorable hike, too. The three of us went on that hike at least three Father's Days. The panorama of the memory is something to see, too, but you'll have to take my word on that.

We couldn't recreate this today; Older Brother and I are scattered to the four winds, Mom and Dad are in New Mexico, and he's not well. But in a sense it doesn't matter, because these memories of times together are still fresh.

Happy Father's Day to all dads, especially Dad and Older Brother. You're good men, and good fathers, and I'm glad to have these memories.
Posted by Borepatch

Wow. Made that same climb with my dad two years earlier on Father's Day.

What a nice tribute.

I haven't been there in years, but will have to return someday. There is a stream that empties into the ocean there along the sound, and the sailing ships would sluice the fresh water into their tanks as it was 90 feet deep right at the shore's edge.

We camped at a place called Hall's Quarry as I recall. Lovely spot.

I live 25 minutes drive from the Sound. Back when I was in the USCG we had heavy-weather moorings for the small boats (41 UTB, 44 MLB) in the mouth of the Sound. The cliffs are sheer on the western side as that is the direction the ice sheets came from, and sloped on the east side. The mountains are shaped like saw teeth for that reason. I've lived here all my life, and the views still amaze me.