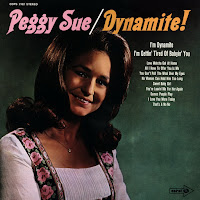 If I asked you to name a famous singer from Butcher Hollow, Kentucky you'd say "Loretta Lynn".  You'd be right, of course.  If I asked you to name another famous singer from Butcher Hollow you might pause a moment before answering Crystal Gale, Loretta's baby sister.  Not many people know that the list of Butcher Hollow singers doesn't end there.
Peggy Sue Webb was Loretta's younger sister, second of four girls (and four boys).  She began performing with Loretta as her big sister's career started taking off.  She also started writing songs, collaborating with Loretta on Don't Come Home A' Drinking (With Loving On Your Mind).  She started her own recording career in 1969 with this (ahem) dynamite single, followed by an LP with the same title.  Over the next dozen years she had a baker's dozen of songs that reached the charts.
Married twice, she goes by Peggy Sue Wright.
I'm Dynamite (Songwriter: Loretta Lynn)

You cannot undo the damage...
I'm dynamite so please don't light the fuse

"Love is like fire,
It can warm your hearth or burn down your house."
---You would be surprised at who said that, but I can't remember right now.

She said it better than I rembered:

“Love is a fire. But whether it is going to warm your hearth or burn down your house, you can never tell.”
-Joan Crawford.

What would that song be without the slide guitar?
What a talented family, I always learn something here.