Does the American electorate want ideology, or does it want good governance?

This is what the election will be about.  Blue State Governors and Blue City Mayors have established a track record of what happens when ideology controls governance.  Red State Governors have shown what happens when good governance is the priority.  There is a real difference between the two in terms of economic activity, employment, personal freedom, and law and order.
I've never in my life seen the choice laid out in such a technicolor difference.
I guess we'll see which way the voters lean, but outside of the Faculty Lounge, the professional leftist agitator class, the New York Times newsroom, and the Democratic Congressional Campaign Committee, my money says that Americans want good governance.
Add in Joe Biden's many, many weaknesses, and the many uncomfortable laws he sponsored in his 40 year political career, and it looks like it will be a wave election.  We're already seeing signs. 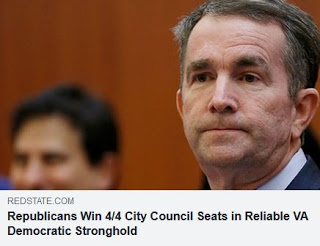 The interesting question is what happens after the election?  I think that the Blue Cities will burn again.  No Federal bailout for rebuilding, though.  If their Mayors won't do what's necessary for their cities then we shouldn't either.
Man, I'm glad we left Maryland.
Posted by Borepatch

But don't you understand? Trump sends out mean Tweets!

Isn't it worth it to endure riots and looting as long as our elites get to feel better about themselves?

That's true, but they'll just export their now homeless populations to red areas. Baltimore was doing that via "non-profits" to house homeless with section 8 voucher revenue a couple of years ago. I don't think they stopped when found out. Another seeding of discontent to disrupt municipalies not under the ideological sway of TPTB, NGO style.

I hope some white libtards get looted and have property destroyed in the future. They will certainly deserve it. Too bad we also have too much garbage from the third world that is imported yearly. It baffles me how Indians and Chinese come here, start a company, and then vote for more leftist idiocy.

Trump can win, but he will have to have a margin in every state sufficient to overcome a very capable Democrat election cheating and fraud machine.

No, no, no. "good governance" opens the door to all manner of totalitarians. Mussolini made the trains run on time. Communists, in Europe, won all sorts of local elections by promising to collect the garbage and fix the potholes. Closer to home, Gretchen Whitmer won by a promise to "fix the damn roads". Not against competence but we need a proper ideological set too.

It's not the looting so much as the horror stories the survivors will tell that will ignite the Saxons fury. I've seen how vibrant diversity treats minorities and the virtue signaling libtards are gonna get red pilled fast in the new American Kingdom of Woke.