It's older than America. 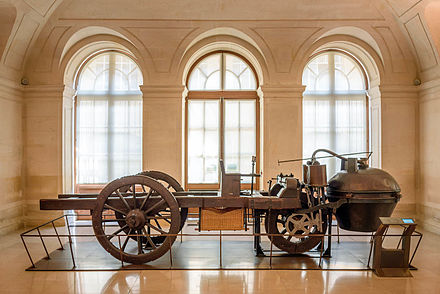 Nicolas-Joseph Cugnot invented this fardier à vapeur in 1770.  It was a three wheeled steam powered transport developed for the French Army, who was looking for something to haul cannons around.  While it had all sorts of drawbacks (you had to fill up its water tank every 15 minutes) it actually worked, and would go several miles per hour while loaded with a few tons of stuff.  He got a pension from King Louis XV for this.

What's cool is that in 2010 some students at ParisTech (yes, there is such a school although they likely have never gone to a Bowl Game) built a working model from original plans.  The public unveiling starts about 2 minutes into the video and while the music is more than a bit annoying the fardier itself is tres magnifique.

Labels: classic cars, history, i am a nerd, nostalgia, techpr0n

Neat device from the time when we were just figuring stuff out.....

Wow! Thanks for that link! I've never even heard of that one!

I spent (too much) time getting a model engine running this past summer that was based on an idea patented before that - 1758. They're called a fire or flame eater and they were an early attempt to use the fire itself to power an engine, not to boil water and use steam. Maybe the first attempt. The fire was outside the cylinder and the engine was low operating pressure, so it's hard to imagine one powering a vehicle like that. Still, it was a full half century before Otto invented the four cycle engine.

Description and model (not mine)
http://www.thehotairengine.com/flame_eater