Napoleon Bonaparte's rise to power is one of the most interesting stories in modern history.  He was lucky, always managing to be in the right place at the right time.  That, combined with his prodigious military skill led him to the head of the French revolutionary government.  One of the lucky breaks he caught was that he was seen by the other European powers as reining in the excesses of the revolutionary terror that had consumed the French Republic.  Basically, while he was a military rival, he was seen as someone they could do business with.

That changed in March 1804, when he sent French Dragoons across the Rhine into sovereign German territory to kidnap Louis Antoine, Duke of Enghien.   The Duke was a prominent French royalist and the heir to the house of Condé, in line to the throne of France. Brought to Paris and tried on trumped up charges of conspiracy, he was executed. A European aristocracy who had breathed a sigh of relief that Napoleon had leashed the French Revolutionary Terror instantly became implacably opposed to his rule. While he was able to conquer for a while, he was unable to hold his gains in the face of their continuing resistance. As Talleyrand is said to have explained, It was worse than a crime; it was a blunder.

The Democrats committed a crime in how they approached the Kavanaugh nomination, but worse for them, they committed a blunder.  This whole thing was a sordid farce - multiple accusers have recanted, one laughably claimed that she went to ten parties where gang rapes occurred but never reported anything to the police, and the primary accuser - who testified before the Senate yesterday - has scored a cool half million dollar payday for her efforts. 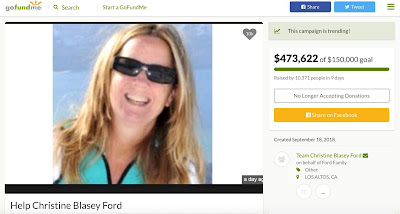 Now the farce looks to be backfiring on them.  Even squishy RINOs like Lindsey Graham are fighting mad at the Democrats, and there looks to be not only a solid GOP voting bloc for confirmation but they look like they'll be joined by some Red State Democrats.  Polls are notoriously unreliable in this Age of Trump, but the reaction by conservatives on social media has been incandescent anger and each of the Senators will have their own internal polling guiding their vote.  It's only 6 weeks to election day and we're now inside the notoriously short attention span of the American voter.  And this was the high visibility political crisis that the Democrats wanted to showcase?

It was worse than a crime; it was a blunder.
Posted by Borepatch

In the purest examination, it's a form of sedition. That's why there should be accountability of those involved, even if it means prosecution for a crime. Playing politics is one things, attempting to bypass the processes outlined in the Constitution with subterfuge is another.

I find your use of Garth as comparison to Dr. Ford somewhat childish...

Use this instead, let's elevate the quality of our discussion

This whole sordid mess - a Hail Mary pass with a bag of feces - has made me madder than anything in recent political history. Even the shenanigans of the Progressives in Wisconsin when Scott Walker won were inside the envelope of our shared traditions. Heck, the D legislators skipping town to avoid a vote just echoed what happened in Minnesota long ago when the bill to establish St.Peter as the capital city ended up in the pocket of one of the solons who then retired to play poker, smoke cigars and drink rye until the deadline expired.

But this stuff. Well, I suppose one lesson is that desperate men - and groups of men/women/whatevs who have no other weapons will pick up and use anything they have. Unlike real Resistance/freedom fighters they of course face no actual consequences and so don't merit the respect we usually accord those who throw molotov cocktails at tanks before being mowed down.

On the negative side I imagine the odds of Keith Ellison stepping down are now zero. On the positive side even the most equitable and pacific of judges being put through this will have steel in his jaw and a faint red glow in his eyes when cases that speak to the sketchy heart of modern progressivism come before him.

Any odds on some even more desperate, even more last ditch accusation coming forward? They do seem slow to learn...

Tim, the problem (as you point out) for the Dems is that they make everything into the Line In The Sand. There's no give-and-take here, it's all their way or the highway, elections be damned.

But like I said, while this will play very well to their core activist base I believe that it will play poorly to the general public what WANT give-and-take and compromise. And who are pretty uncomfortable with character assassination. A blunder.

It's been a series of blunders they keep repeating. They seem to think America wants to be led by rancid, deceitful hormonal old women.