Twitter cuts off the key part of the picture, so here it it: 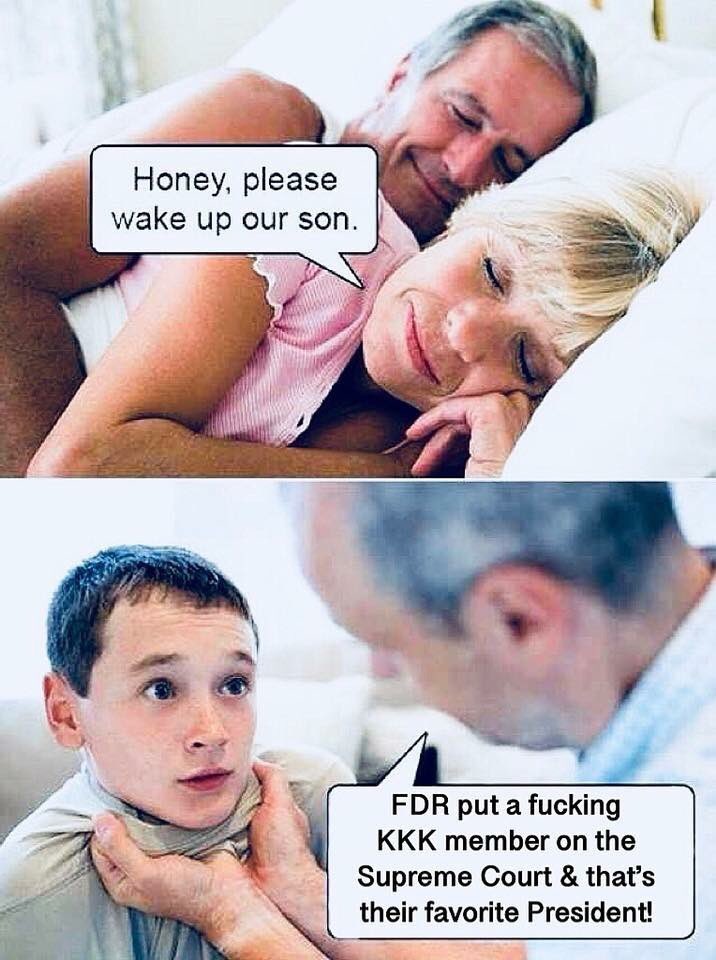 Sal refers, of course, to Associate Justice Hugo Black.  Black was a Senator when he was nominated, and the rules of the time extended the courtesy of confirmation without a vote when the nominee was a sitting Senator.  Instead, the Judiciary Committee held hearings on his appointment, with a particular focus on his membership in the Ku Klux Klan.  He was confirmed anyway, but the KKK connection was hushed up by the heavily Democratic Senate.

Black went on to make history (of sorts) on the Court, writing the majority decision on Korematsu v. United States which found it perfectly constitutional to round up hundreds of thousands of American citizens and imprison them without trial in concentration camps.  Sort of what you'd expect from a President who was America's most notorious fascist leader.*

But Brett Kavanaugh is a stain on the Court's honor, or something.

* See the first footnote at the bottom of the post.  Or you could get a longer bill of indictment for FDR here.
Posted by Borepatch

He called him "A Goddamn COMMIE!", and from they way he said it, I knew he meant it.

Yep, none of my family liked him.

In the rush to stain FDR for his "Racist!" detention of the Japanese (while we were at war with Japan), people overlook the fact that more Germans and Italians were detained than Japanese. Oh, and over 10% of the Japanese admitted to being willing to be traitors, saboteurs, and spies.

Doesn't make him any better. Just annoys me that people focus on one thing, ignoring the greater picture and the times.

Not to mention Abe Fortas who was LBJ's political crony. Sort of Harriet Meirs with more talent. And as long as we are on Korematsu what about Earl Warren who was a mover and shaker in the detention that led to the case in the first place.