Glen Filthie has been on a roll lately, posting about a recent range day and the best chain saw tree felling of all time.  But then he puts the cherry on top by posting this: 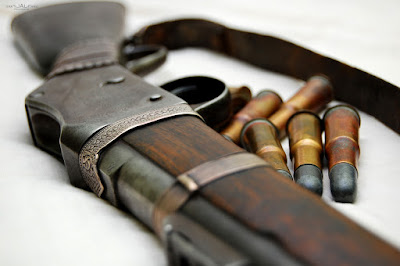 This is Canada's (and pretty much the British Commonwealth) response to America's Springfield Trapdoor rifle. Unlike the Springfield's 45-7 cartridge, the Martini Henry is chambered in the long obsolete 577/450.There has been a resurgence of long dead American blackpowder guns and even I have a much loved Remington rolling block single shot. My arch enemies at the rod and gun club all have Sharps and Springfields and we have a ball with them. The old British guns? They are still deader n' a dodo.Or are they?

Reading Glen's post reminded me of Kim du Toit's Gratuitous Gun Pictures, which captured my love affair with old rifles.  The history is the attraction, not the practicality, and Kim's writing brought that out superbly.  You want practical, get you an evil black rifle chambered for the poodle shooter.  Me, I keep coming back to the Old School ones that billow clouds of history with each trigger squeeze.

The battle of Roarke's Drift ended in a blaze of Martini-Henry smoke as 156 desperate British soldiers showed what fortified positions and brass cartridges could accomplish against thousands of attackers armed with spear and shield. Valor was present in overwhelming numbers on both sides that day.  Eleven Victoria Crosses were awarded for deeds performed that day.  In that day the VC was not awarded posthumously, and so the count would have been higher had the battle occurred after the reign of the Widow of Windsor. This was the highest number of those awards  - purchased with blood, really - by a single Regiment in a single action in the history of the British Army.  The final assault was immortalized in the 1964 film Zulu.


To me, there's no black plastic that remotely offers that whiff of history.  Sure, they're entirely practical, and I'd want one in a SHTF situation.  But I'd love a Martini in the gun safe.  No AR pattern rifle ever inspired this: 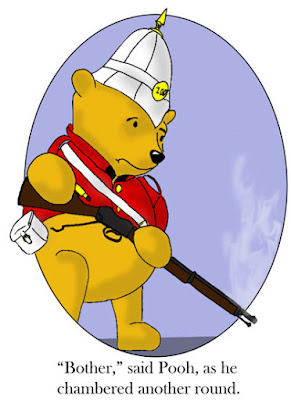 Tam explains the back story of the picture.  It's worth a read.  Like I said, no AR pattern rifle would inspire something like this.

Glen writes in his post about how the cartridge is obsolete and so you'd not only want to reload, but to cast your own bullets.  Fortunately, co-blogger ASM826 has some pretty serious skills in that respect.  "Practical" is for ARs; those of us enamored of the older fare must needs adjust.  Practical isn't the point, remember.

But the history, ah the history.  Kim is back blogging, and I'd love to see him resurrect his Gun Pic List.  After all, he became famous as "the worst blogger on the Internet" (as defined by moonbats) for this (among other Double Plus Ungood writings).  It would certainly épater les bourgeois once again.  Not that he'd ever want to do that.  And maybe he'd write about old school beauties like this again.

I am a recent reader of your site. As a retired gentleman, I am afraid that my dreams of unique firearms must sadly remain dreams, out of the reach of limited income. But I still dream!

Your comment that Kim du Toit was once named the Worst Blogger Ever... I am proud to say that I am a reader of the Worst Blogger, and have been for many, many years. And I agree, the 'Net needs more gun p*rn. Bring back the gun pics, Kim!

Very tempting. They're easy enough to find over here and a good rifle for left-handers. A Snider first, though.

There is a lot of stuff on YooTube where these rifles are resurrected, cartridges are machined etc.