Why Everyone Needs a Lathe - A Brigid Guest Post 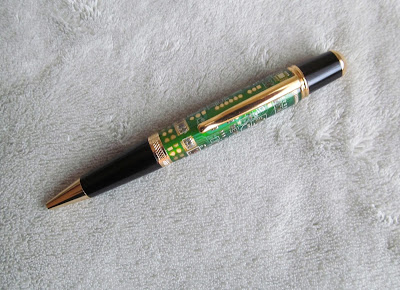 For the techno-geeks out there.  This was a little something put together for Partner in Grime, sort of an early anniversary gift a while back.

Yes, it's a pen.  But it's not a pen you can buy from a store. There are a few on sale via Etsy for top dollar,  but wouldn't it be better (and appeal to the Scot in you) to present one made for less money AND the pride of presenting something hand crafted?

Look closely, that is real circuit board. You can even see little resister valves as you turn it around! 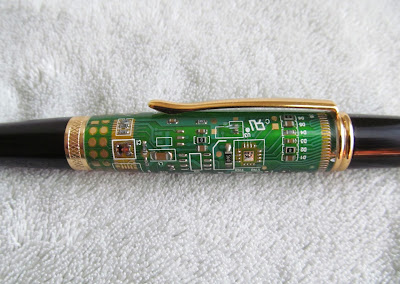 You just need to know someone with a metal lathe (hmmm. . have I seen a lathe anywhere around here?)

The kit, from Woodcraft of Indianapolis was easy, no blank cutting, drilling or gluing, simply square the end of the acrylic bank, mount on your mandrel with bushings and start turning (use Wall Street II Tropical Island bushings, they don't come with the kit).  As in any lasting relationship, you want to go SLOW.  Like your wit, keep the tools sharp and keep that initial pressure light.  Think PMS. NO, not that kind, but the Polymethyl-Methacrylate Sensitive kind.  You WILL want to take your time with the lathe.

The actual ink was replaced with a Parker assembly (a bit better quality than the kit one) and it works great, no skipping, with a heavy, expensive look and feel to it.

With patience and basic shop tools, you can make a gift that even the coolest geek would love.  They are sold out on this design but at the Indy store and the Downer's Grove one nearer to where we live but they still have a bunch of really cool ones. 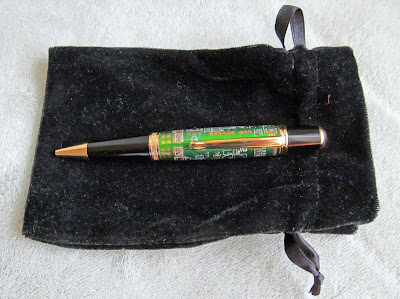 Pretty cool. An internet search shows a lot of people have the circuit board kits, or the blanks. I might have to blow the dust off of the pen turning gear.

Thanks John - I was disappointed when Woodcraft sold out as I wanted to make a second one for my best friend, glad they're still out that.

I would prefer one that actually works.