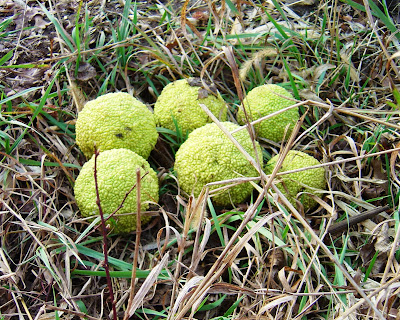 While visiting a friends farm in Northern Indiana one fall, someone brought over these round green balls that appeared to be some kind of pod or alien fruit. "What the heck are those?". I asked. Apparently they were the fruit off of the Osage Orange tree, otherwise known as Hedge Apples. My friends  said they repel spiders. You put them in a bowl or on a piece of foil and place them around the house. They won't spoil or mold and eventually just shrink to the side of a walnut. I should have brought more of them home.

For I am afraid of spiders. I can watch "Walking Dead" and sleep like a baby, but spot a big hairy spider in the house and I'm tip toeing around with a rolled up newspaper for days.

I lived in the desert after grad school, and woke once to find a tarantula in my bed. My roommate, raised there, heard my shout and got a dust pan and gently picked it up, talking to it softly, and took it back to the yard to be released. "They do more good than harm" she said. I slept on the couch for the next month. 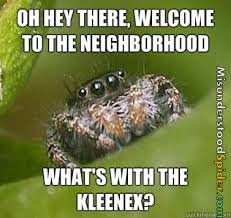 When I too lived out in the country a few years ago, spiders were a constant, short of running them over with your giant Chevy Subdivision, they were pretty indestructible.  The little ones, I left alone, as they do eat bugs and such around the property, letting them be or gently removing them from house to garden. But those large hairy fast moving spiders scared me to no end.  One night I opened the door to let the dog in and in rushes a grasshopper, into the house as fast as he could go.  What the. . ??  He was being chased, by a large spider.  I got the door closed before a spidey security breach, got the grasshopper picked up in a jar, and put him out the back door at the opposite end of the house..  Next time I opened the front door, the spider was waiting, rushing at the door again. . .

We used the back door for a couple of weeks.

I can handle a lot of things, be it heights, or horror movies. But not giant spiders. 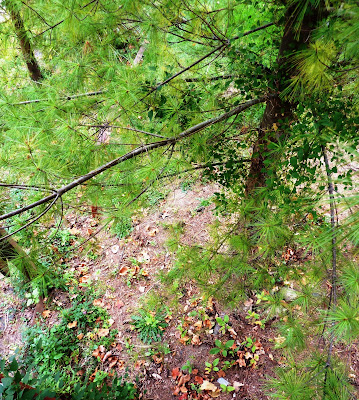 So there I was, staying with some friends who live out in the country, up at 3:30 in the morning to use the bathroom (note to self no Guinness after 8 pm) and as I'm taking care of business, a wolf spider about the size of a Buick runs across the floor towards me. Barefoot, I threw a hand towel on it and proceeded with my rendition of the Grapes of Wrath stomp.

No movement from under the towel. He didn't escape, the floor around it was clear. I left it there for the morning.

At 5 am, I got up (wearing slippers just in case) and look at the towel, prepared to just shake it outside and then throw it in the wash. But what caught my eye was the large dead spider, legs curled up, a few inches away. He'd managed to crawl out and expire next to the tub, rolled up like a crescent roll. OK. At least he was dead. I went to get a paper towel to dispose of the remains.

This is where the fun started

I came back and Mr. Spider was completely reanimated, and pissed off, on TOP of the towel, ready to pounce on my foot like a Chihuahua on a pork chop.

He'd been dead. I'd been sure of it. I'm kind of trained in those things. Now he's back.

I had the only zombie spider in all of the Midwest.

Fortunately, I was highly trained in zombie spider removal and wearing nothing but tactical bunny slippers, dispatched him with a roll of paper towels. 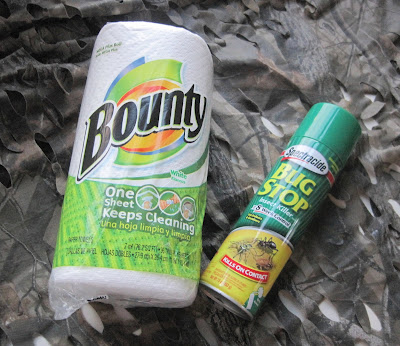 Funny post Brigid. Reminded me of a close friend who is retired Federal Law Enforcement. One of the bravest men I have ever known who has done undercover work with the biker gangs. When it comes to spiders, he squeals like a little girl.

Here you go,
https://www.youtube.com/watch?v=axDpsLPhYSg
I disturbed one of these females with young in my house a few years ago Bump the spider, watch a whole bunch of little ones head in all directions.
Normally I will put a spider on a piece of paper and release it outside.
This time it was Raid's YardGuard time.
No survivors.

In my distant youth I read a treatese by some psyco-babble purveyor that the reason that girls were afraid of spiders was based on some perfectly valid genitic/evolutionary survival reaction to hairy critters. ???
And no. It was not Men are from Mars, Women are from Venus (my wife and I read that to each other and laughed throughout).

I HAVE been summoned (loudly and in a voice several ovtaves higher than the final note demanded to accompany..."and the home of the brave" of the National Anthem) at 0200 Hrs to slay an arachnid that surrendered its privledge to life by entering the bathroom of the duplex I rented to two young missionary ladies (pioneer stock not withstanding) to slay the beast!

We did not have running water as a kid and the outhouse was prime Black Widow habitat and since one had bitten my mom on the bum, we were careful to look for them and terminate them with extreme predudice. But, their discovery did not cause us to loose our minds.


I think the orginal analyst was correct in that there is some ativistic reason why girlie girls who can endure childbirth (often repeatedly), turn an old hen into Sunday Dinner, but are terrified beyond good sense, by a bug of which they hold sway over its very existense and with a whim can remove it from the land of the living by simply stepping forward and performing a dance step made popular by Chubby Checker in the 60s.

Be careful if in Hawaii, then. The big Cane Spiders there will freak you out. They aren't dangerous but are very impressive. My wife and I were at a favorite bistro in Hilo a number of years ago (sadly it's been closed for a while now, it was IMHO the best restaurant on Hilo side), and there was a large decorative palm tree right behind her against the wall. (She and I always fight over who gets to sit with our back to the wall, this particular night she 'won'.) While we were waiting for dinner, I saw a big cane spider about 4" across scurry along the baseboard behind the pot holding the palm. Our dinner arrived right about then, and we began to enjoy the meal. A couple of minutes later, a bit of movement on the palm attracted my attention, and the spider had climbed out on a palm frond and was poised right above my wife's right shoulder. So in a calm voice I said, "Don't look now, love, but there's a big cane spider about to jump onto your right shoulder." She thought I was creating a diversion so I could poach some of her dinner, so she said, "Yea, right - stay away from my plate!" I assured her that I was not joking, so she slowly turned her head, trying to see what I was looking at while still keeping an eye on me, just in case it was a ruse. When she saw the rather imposing arachnid, she kind of shrieked and jumped up and away from the table, knocking the spider off the frond. It promptly scurried away to the corner, where a waitress gently scooped it up in her hands and carried it outside. Oh yeah, while my wife was gracefully evacuating the table area, I did manage to grab a bite of her dinner!

It's funny, Brigid, you remind me of her in your writings - she's smart, articulate, loves to fly all manner of aircraft, confident, very able to take care of herself, and yet not at all tolerant of spiders (and snakes). I honestly think she'd much rather deal with an emergency of some sort than face a spider or a snake. What's up with that??