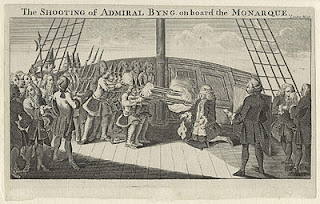 Sir John Byng was an admiral in the Royal Navy during the 18th century. Britain and France spent almost all of that century at war - The War of the Spanish Succession, Queen Anne's War, King George's War, and so on.

During The Seven Years' War, Admiral Byng commanded a fleet charged with the defense of the island of Minorca from a French fleet. The inconclusive battle was very interesting, and we'll come back to it in a minute:


The French badly damaged the leading ships and slipped away. When his flag captain pointed out to Byng that by standing out of his line, he could bring the centre of the enemy to closer action, he declined on the ground that Thomas Mathews had been dismissed for so doing. The French, who were equal in number to the British, got away undamaged.

Now it seems that not only had Admiral Mattews been dismissed for being insufficiently aggressive, but Lt. Baker Philips was shot by firing squad for being overly aggressive.

It seems that Byng wasn't a great commander, and had his position more due to influence as to talent. So it's unsurprising that he didn't handle the situation with elan. It was surprising that they shot him by firing squad, on this date in 1757.


The severity of the penalty, aided by a not unjust suspicion that the Admiralty sought to cover themselves by throwing all the blame on the admiral led to a reaction in favour of Byng both in the Navy and in the country which had previously demanded retribution.
William Pitt the Elder, then Leader of the House of Commons, told the king: "the House of Commons, Sir, is inclined to mercy", to which George II responded: "You have taught me to look for the sense of my people elsewhere than in the House of Commons."
The royal prerogative was not exercised and John Byng was shot on 14 March 1757 in the Solent on the forecastle of HMS Monarch by a platoon of musqueteers.

This small-minded, legalistic atrocity was immortalized by Voltaire in his novel Candide. The hero (Candide) is in Britain, and witnesses the execution of an officer. He is told "in this country, it is wise to kill an admiral from time to time to encourage the others." Dans ce pays-ci, il est bon de tuer de temps en temps un amiral pour encourager les autres.

Byng's epitath captures the disgust of the British nation to the whole sorry affair:


To the perpetual Disgrace
of PUBLICK JUSTICE
The Honble. JOHN BYNG Esqr
Admiral of the Blue
Fell a MARTYR to
POLITICAL PERSECUTION
March 14th in the year 1757 when
BRAVERY and LOYALTY
were Insufficient Securities
For the
Life and Honour
of a
NAVAL OFFICER

I've written about Obama's inability to hire strong subordinates, and to support them once hired. We've seen what happens in these cases - e.g. to poor Admiral Byng - and that may contribute to a reluctance to serve the current president.
Posted by Borepatch

My guess is that appointees to the Obama Administration are at severe risk for being thrown under the nearest bus when something goes wrong. It's a risk associated with being close to and serving "The One".