Aloysius Schmitt entered the Navy in 1939 and ended up serving on the USS Oklahoma at Pearl Harbor.  He was one of the many trapped when the ship capsized during the December 7 attack.    He was in a compartment with many sailors; the compartment had a porthole.  He helped many sailors escape through he port hole, and refused to leave when it was his turn, instead helping more sailors escape.

He was the first US Chaplain to die in World War II.  He would not be the last. 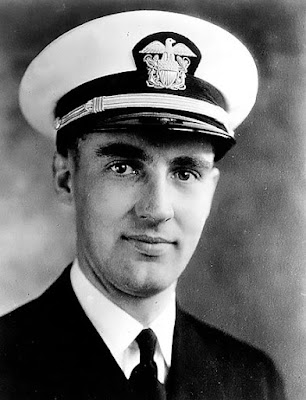 Rest in Peace, Padre.  To you and your comrades.

I wonder if men like that still exist... and I wonder how they're made.

I dunno how many times some ignorant shitlib says "There's no such thing as heroes, all they are, are people that are too cold, hungry and desperate to give a damn..." Welp... how do ya explain guys like this? Not to cheapen this man's sacrifice... but there were many others as brave and courageous as he was...

What in hell is happening to us?

I'm not saying that heroism is unique to this group of people, but it sure seems like being a Catholic priest helps some.

May he rest in peace.

In some ways, it feels like a different age. They still walk among us, although I think perhaps we are less sensitive to their presence.

I recently finished Descent into Darkness by Edward Raymer about the hard hat divers who worked on refloating the ships and recovering bodies. An amazing story about remarkable men who had an almost impossible job.

Bravery comes in so many flavors. Listen to Marine general john Kellys speech: "six seconds then into eternity", my father climbing into a B-17 ball turret 58 times, a certain Detroit police officer jumping on a crazy man with a knife and dieing trying to save the baby the man was holding hostage. I hold in more awe those who have time to think about what they are doing. A friend of mine and I were working a construction job, we were about 30-40 feet in the air, he screwed up and was falling backwards off the open platform I managed to grab his shirt while holding onto an angle iron with one hand, he was hanging onto my arm with a death grip. I felt myself slipping and told him "I dont think I can hold on doug" He let go of my arm so that he wouldnt take me with him. I managed to pull him close enough so he could grab iron and we both went out and got very drunk that night. He later tried to joke that his hand slipped but we were face to face- he chose to let go of me.