Tam posts about the old, great manual film cameras and acknowledges that their day is long past:

These days when I look at "film cameras for beginners" lists, I see recommendations like the Nikon FM2, Olympus OM-1, or Pentax K1000.
These cameras are all-manual. Unless someone has a grasp of the exposure triangle...shutter speed, aperture, ISO (light sensitivity of the film/sensor)...they are going to be burning film trying to learn it.

Le sigh.  Whenever anyone brings up the Pentax K1000 I go from zero to sixty on the nostalgia dial in 4.2 seconds.  I loved my K1000.  I took good pictures with it, like this from Ostia Antica, the old port city of Rome.  There was a temple of Mithra there, and it looks exactly like this: 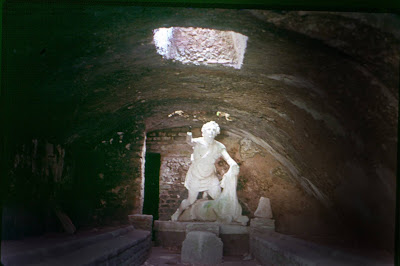 OK, confession time: I did a little enhancement on the scanned photo using The Gimp, a Photoshop equivalent (click through for the photo before modification).  But in a sense this proves Tam's point that you will burn a lot of film to learn the camera (and you'd still need a better light meter than the built in one) and you'd need to know how to triangulate light readings from different parts of where you're going to shoot.  I didn't in 1990 when I took that picture.

But man, I loved that camera.  And I did take a great pic of Florence at night from the hill across the river.  I used Kodachrome slide film because you could blow it up without getting grainy.  That photo hung in my living room for a long time.  After all, it ain't bragging if you can do it.

But it's weird to find me in the same boat as today's hipsters - I really liked the dials, and after a few years of shooting (and developing) lots of rolls of film I got better.  Once I added a Takumar zoom lens I could get lots of pictures framed properly and then set exposure and depth of field separately.  I even got pretty good "snapshots" like this one of a 4 year old #1 Son in a little village on the Moselle river in Germany, somewhere in 1997.  I had to set up the shot while he was looking away and then I called his name: 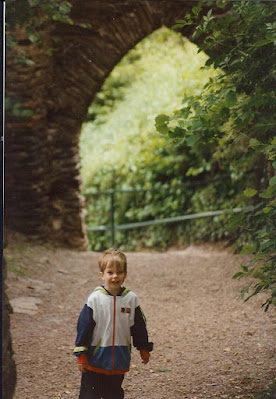 But by then we were already in the era of digital cameras - my next trip to Rome didn't see me dragging along the Pentax; rather it was a Fujifilm digital.  Now my iPhone takes basically all my snapshots and there's no film or developing cost.

But something is gained, and something is lost.  Like I said, le sigh.  I sure loved that Pentax, in a way I've never loved a camera since.

Still have my OM-1, squirreled away somewhere.
I don't miss it.

I'll take my Canon 40D and Mark II any day, and twice on Sundays, because now I can shoot 1000 pics/day for almost free, instead of $20/roll, by the time I get the 4x6 prints, over- and under-exposed by the automagic photo manglers.

My photo lab is called an HP with an i7 chip, and the only prints I make I make myself, any size the printer will handle, after Photoshop, Lightroom, and any other ten programs make my work as good as anyone on the planet, if I so choose to invest the effort.

Yes, I learned the craft the old way, but someone either has an eye for lighting and composition, or they don't, and the benefit of the new gear is that you can now learn those skills for pennies instead of ten$ of thousand$ in wasted efforts. No comparison.

The only thing it showed me is that 90% of "pro" photography is either actual crap, or people with just average skill, but more desire to do that for a living than I ever had or wanted. Sorry/not sorry. Photography, even good photography, is about as hard to learn as typing. It's more about where you are, and when you're there, than about technical skill, though the latter is obviously necessary. I'm not going to climb K2 for NatGeo for that view, or sit/stalk outside somebody's uptown brownstone for 30 hours to get the It Girl paparazzi shot. I'm not going to devote 20 years climbing the ladder just to get to be at the dugout or on the green to get that SI cover shot. I may make it to Africa on safari someday, but if/when I do, I want to take a camera and a big game rifle, not either/or.

The 10% or so truly greats, at or near the pinnacle of the field, OTOH, make the lemon worth the squeeze for the viewer, but they're as rare as actual rockstars or .300 hitters, overall. Which is why photorags like LIFE starved on the vine, the pay is crap in most cases, and the occ field is vastly oversubscribed.

But as a dedicated hobbyist at it, it's a great time to be alive.

BTW, nice pic you posted; but the sarcophagus of the Knight of the Holy Grail is missing, and there's some big marble statue there. Who put that there? ;)

I hear ya BP. For me, it’s watches. I have the Casio mud Mudmaster that is solar powered, predicts weather, does basic compass work, and resets itself to an atomic cesium clock in Paris every couple of days and is accurate down to a fraction of a second. Ya put it on and forget it. But... gosh, I’d love a self winding Rolex Submariner or a Breitling Navitimer or Superocean, with their inherent inaccuracies and extra maintenance.

As I get older the old ways become more important to me...

It was not two hours ago that I threw my old film snapshot camera into the trash. Sure, it's perfectly functional, the batteries although dead, were not leaking, but even if it were possible to buy film for it, the question is why? It's just a cheap, plastic snapshot camera with very little value when it was new, and none whatsoever now (even Goodwill would send it to the dumpster). It's all part of a wintertime project of weeding through attic and garage boxes, sorting out the few bits that might still have value, and disposing of the rest so that my heirs don't have to do it. The perennial question for us packrat types is "How can you throw away perfectly GOOD junk?"
Now, as for that Smith-Corona typewriter that saw me through college....hmmm.....

I remember nostalgia fondly.
I confess, my Leica film camera is in it's case waiting for me to find a use for it.
One of the best film cameras in the world, and I use my phone so much, I don't have an urge to deal with film.

Started with film in high-school with a Minolta Hi-Matic 7. Got a Canon T-70 in the middle 80's when our son was born, and then started going digital when I started doing eBay and web stuff.

Now I have a ton of Nikon stuff, which is cool because my son shoots Nikon and we can swap lenses and flash units.

He still shoots film with his Nikon F4.

Ostia is an unappreciated and under visited gem. Last trip there I tried to locate all the Mithraeums, I seem to recall that there were six or seven known. Missed a few, but did get this one. The statue is in the museum, this is a nice repro. TW

I agree with Aesop here, and except for brand names, my experience pretty much parallels his.

I have sold photos and I have given as gifts framed prints of some of my work. I am an engineer by trade but at one time I thought I would shoot weddings after I retired.

Then I started shooting a few.

That's when I discovered that the actual photography was only a small part of wedding or event photography. (...then there is dealing with bridezilla and her mom...)It turned out to be harder work than my day job.

I have been retired now for over a year and I haven't shot a single wedding. But, what I DO like to do is go on what I call photo-safaris. Road trips are my favorite.

Aesop is right, good shooters are rare, I worked with a few and they consider me decent with a camera. The day engineering job gets in the way, can't wait to retire and go on photo safaris. it's why I bought the second F5. Shot a roll of HP5 through it, works great and the IQ out of the 105 2.5 is astounding.

Shoot film, it makes you stop and think about what you are doing.