The dog that had nine lives

OK, he really only had 5 lives but he was a World War II combat veteran and hero.

Václav Bozděch was a Czech air gunner who left Czechoslovakia when the war began, making his way to Britain where he joined the RAF.  He was in France in 1940 during the "Phony War" of late 1939 and early 1940.  On one mission his two seater bomber went down in no man's land, which is where our story begins.  He and his pilot sought refuge in an abandoned farmhouse where they found a German Shepherd puppy.  He was dehydrated and starving, and so they gave him water and some chocolate to eat.

If their plane hadn't gone down, the puppy surely would have died.  Let's score that as life #1 of the nine 5 lives.

After resting, the two airmen decided they had to make a break for their lines.  They left and shut the puppy in (so it wouldn't follow them) but the puppy started crying, and attracted the attention of a German patrol.  The two decided that one would have to go back and kill the puppy to shut it up.  Bozděch picked up a rock on his way back to the farmhouse but found himself unable to kill the puppy.  Instead, he picked him up and put him in his flight suit and carried him back to the safety of the Allied lines.

He named the puppy Antis, after the airplane he used to fly in back in Czechoslovakia.  Antis became the unofficial squadron mascot, and flew on missions with Bozděch as he manned the tail gun.  But the Blitzkrieg was unleashed and the squadron's planes were all shot up on the ground, and Bozděch and the others decided that they needed to get out of collapsing France, and made for Spain.  He took Antis with them.

It was a hard journey, as the roads were clogged with refugees.  They scavenged a push cart for their belongings, and put Antis on top but the puppy kept falling off.  Some of the people suggested killing the dog so he wouldn't show them down.  Instead, Bozděch picked him up and carried him, and the other squadron mates took turns carrying him

They got on a train, which was another story.  The train was packed with refugees and there was no room for them.  But Antis ran to a cattle car at the end of the train; when they knocked on the door, they found just a single family in the car.  The daughter had been eating a chocolate bar and Antis had smelled it.

From Spain, they made their way to Gibraltar to get a ship back to Britain.  They got passage in a convoy, but on the dock the tender refused to let them bring the dog.  They had to leave Antis on the dock.  But when he got to the ship, Bozděch climbed down a ladder to a swimming platform and called to Antis.  The dog swam the 100 yards from the dock to the ship, and Bozděch hid him in the cargo hold.

As their ship approached Britain, the crew told Bozděch that Britain had strict animal quarantine laws to prevent the introduction of rabies.  Bozděch would have to pay for the 6 month quarantine and if he couldn't, Antis would be put down.  Bozděch had no money.  He smuggled Antis to shore in a box and eluded the Shore Patrol, rejoining the RAF with his dog.

Bozděch spent the war flying combat sorties for the RAF, frequently taking Antis up with him.  Both emerged from the war.  Antis was wounded in an air raid but searched for survivors anyway.  The squadron loved him. After the way, Bozděch returned to Czechoslovakia, but the Communists took power in 1948 and Bozděch had to flee for his life.  This time it was Antis who saved him, showing the way past search parties as they made their way to West Germany and freedom. 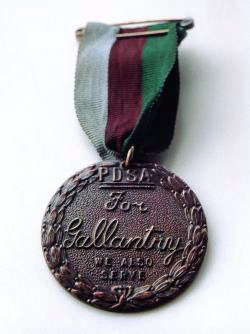 Antis and Bozděch lived out their lives in Britain.  In 1949, Antis was awarded the Dickin Medal (sometimes called "the animal's Victoria Cross") for heroism.  Antis lived to a ripe old age for a German Shepherd, crossing the Rainbow Bridge in 1953.

You can read about Antis' story in the 1961 book One Man And His Dog.  There's also a good post about him at the Flight Blog.


This is out of print and pretty expensive ($40 for paperback).  You could look at Damien Lewis' book War Dog.