Why Hillary Clinton is in trouble

This seems pretty spot on:

Trump and Sanders, each in his own way, have shown too many people that it’s possible to hope for something other than an intolerable state of business as usual.  In the wake of their candidacies, a great many voters have decided that they’re no longer willing to vote for the lesser of two evils. 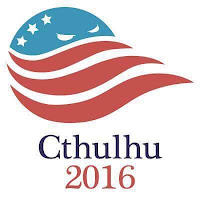 That’s a point of some importance.  To my mind, it’s far from accidental that for the last few decades, every presidential election here in the US has been enlivened by bumper stickers calling on voters to support the presidential ambitions of Cthulhu, the tentacled primeval horror out of H.P. Lovecraft’s tales of cosmic dread. I’m sorry to say that the Elder God’s campaign faces a serious constitutional challenge, as he was spawned on the world of Vhoorl in the twenty-third nebula and currently resides in the drowned corpse-city of R’lyeh, and as far as I know neither of these are US territory. Still, his bid for the White House has gotten further than most other imaginary candidacies, and I’ve long thought that the secret behind that success is Cthulhu’s campaign slogan: “Why settle for the lesser evil?”


The reason that this slogan reliably elicits laughter, in turn, is that the entire rhetoric of presidential politics in the United States for decades now has fixated on the claim that one party’s pet stooge won’t do anything quite as appalling as the other side’s will, even though they all support the same policies and are bought and sold by the same corrupt interests. Over and over again, we’ve been told that we have to vote for whatever candidate this or that party has retched up, because otherwise the other side will get to nominate a Supreme Court justice or two, or get us into another war, or do something else bad.  Any suggestion that a candidate might be expected to do something positive—that he or she might, for example, reject the bipartisan policies that have crashed the standard of living for most Americans, consigned the nation’s infrastructure to malign neglect, and pursued gargantuan corporate welfare programs, such as the worthless F-35 fighter, at the expense of anything more useful or necessary—is dismissed out of hand as “unrealistic.”

So why is this so bad for Hillary?  Because while we don't know that Trump will make changes here, it's a dead certainty that Hillary won't.  And people are looking for change.

The question is not whether there will be a Bradley Effect, the question is how big the Bradley Effect will be.  In the UK, all of the "you're a racist if you don't vote the way we want you to" led to the polls being off by about 8%.  Will the effect here be the same size?  More?  Less?

We'll see.  But with people wanting change and being told that they're racist to want change, this effect will be real.
Posted by Borepatch

A question, BP: In 2008 you said you'd go with Obama because you figured he would wind up burning everything down and the Republicans would merely perform somewhat slower oxidation.

So, what about Hillary? Not only is Hillary stunningly incompetent and so corrupt as to require a new definition of the word, incompetent and corrupt people are the only ones she knows and associates with, guaranteeing a fed dot gov that will make Obama's efforts look like a church picnic.

I don't think I was wrong then, and think that we'd be much worse off with a President Romney - certainly there would be at least one more restrictive and useless gun control bill as law of the land. I also think that we'd still have Obamacare in place.

Your point about incompetent and corrupt is dead on, and the corollary about her associates is brilliant. The only thing that I would add is ruthlessness to that toxic brew.

But she's not at all my choice. I need to do a post about this, but I don't actually have a choice this year. It really doesn't matter because it looks like the Trump landslide has already started, and the way Preference Cascades work mean that it will only accelerate.

I think you are fooling yourself with visions of a Trump landslide.. You've done that before, as when you were confident all the way to the election that Romney would win over Obama by a significant majority. Perhaps it is the Pauline Kael effect, but among the people I know IRL only two (a married couple) who actually support Trump. Most of them understand how corrupt Clinton is, and were prepared to vote GOP until that meant voting for a man totally unqualified--psychologically, morally, and intellectually--for the office. The only a uestion is whether to actually vote for the Hillary or pursue a NOTA option (which is what I will do).

I also think you are not taking into account the Bradley Effect that runs the other way: all the people who don't want to admit they will vote for Hillary the Harridan.

I know for a fact that many Democrats don't give a damn what the candidate is, looks like, does, or has done - they vote the party line. Period. NBC did a recent poll where it indicated the majority of voters felt Clinton was out of line, and guilty of breaking the law. The poll also indicated that the majority of Democrats were going to VOTE FOR HER ANYWAY.

Add to that the incredible control over the election process and counting of votes - many of them dead, illegal, or multiple by the same individual - by the Left, and I think we are going to be suffering another Clinton presidency come January 2017.

There are too many independents and even registered Republicans who refuse to vote for Trump, so I am not convinced that even a fair and honest election would see him as the winner, and you know damned well "fair and honest" isn't going to happen.

I'd love to be pleasantly surprised, but I don't think that is going to happen, even though I will be voting for Trump myself.

PS: While I agree that some people are looking for a change, I believe you are "looking in the mirror" if you think there are enough of those folks to put him into office.