The local volunteer fire department put on a carnival to raise money.  The Queen Of The World and I rode over on the Harley for an evening of small town summertime fun. 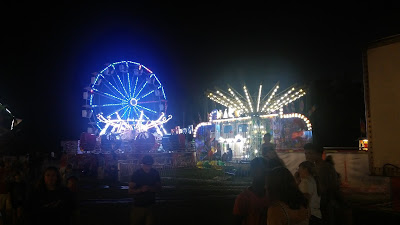 One of the sideshow stalls was a shooting gallery.  It was just BB guns, but full automatic BB guns.  You had to shoot out the red star on the tiny card (click to embiggen). 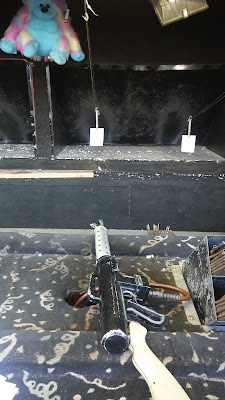 Everyone around me was just blasting away, and getting nowhere.  But the Queen Of The World was needing a big furry stuffed thingy, and so I handed over my $3 and took aim.  I did short bursts, gradually chopping out the entire center of the card.  When my 100 BBs were all expended, the carnie reeled the card in.  The red star was entirely shot out. 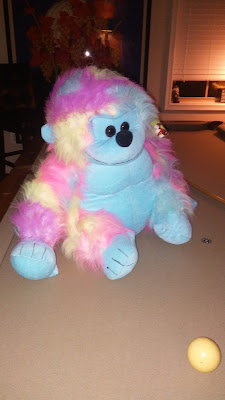 We rode home on the Harley with a purple gorilla in the trunk.  All the spectators were impressed with my shooting; the Queen Of The World was thrilled that her beau had won her a prize at a feat of skill; I'm unreasonably self-satisfied with myself.  Trigger control FTW!

I was glad to win her a big prize, but was glad it wasn't any bigger - would have had to lash it down to the top of the bike's trunk.
Posted by Borepatch

Labels: made of win, me me me, Queen of the World, shooty goodness

Reminds me of a pink (or maybe purple) gorilla we once shot to pieces at Jack's Sooper Seekret Lair for a blogger-shoot.
- Brad

Good for you! And always carry bungee cords ... :o)

I've only seen that done about three times... Nice shooting!!!

Wait a minute.
I thought that on top of the trunk, or lashed to the backrest, was the proper location for those types of bagged beasties.