Of Free Trade, Bastiat's "Seen and Unseen", and the hypocrisy of the Democratic Party

Peter has a good post up about free trade. I left a comment about how economists (like everyone) suffer from Bastiat's "The Seen and the Unseen" fallacy - you notice what you measure and you don't notice what you don't measure.  Economists measure the amount of trade, and increasingly do not measure the actual impact of unemployment (not least because the way unemployment is measured has become corrupted by a cynical government.  And suddenly I'm afraid that I found myself in a rant. 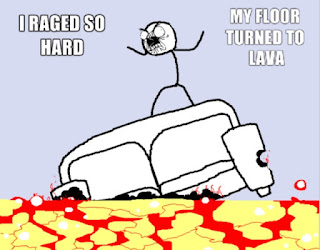 It's not Peter's fault - I've done this before, on this topic, and this post is really a combination of two older posts that are suddenly made fresh by the Trump phenomenon.  You want President Trump?

This is how you get President Trump.

Globalization is presented in a very sterile manner.  That's because the people who benefit from it are the Intellectual Class - the Harvard Business School types, the Banksters, the Intellectual Class hangers on.  Lots of dusty figures and graphs.  It's left to the artists - in this case, a latter day Woodie Guthrie - to give it a human face.
The plant in the video was the Goodyear factory in Union City, TN.  It closed in 2011. When I was a lad, Woodie Guthrie was a hero of the Left, a man who stuck up for the Little Guy who was oppressed by the Powers That Be.  Nowadays, this is called right wing hate music.  Just because.
Quite frankly, there's nothing that more clearly demonstrates the decadence of the Left.  And nothing that more clearly demonstrates why I hold them in contempt.  It's all upper middle class SWPL self-interest, and I say this as someone who's been sort of upper middle class for a long time.  The people in this video are our neighbors.  Where, o where is Hollywood and the Left?  The World wonders.

Actually, we don't.  That's where the contempt springs from.  The hypocrisy stinks to high heaven.

HYPOCRITE, n. One who, professing virtues that he does not respect, secures the advantage of seeming to be what he despises.

I used to be a Democrat.  I used to hold elective office in the Democratic Party Apparat (County Council, as a matter of fact).  I'm registered Independent - as I've been since the 1980s - but have never been a Republican, and have no plans to change that.

I grew up pretty liberal, as childhood friend 2cents could tell you.  Quite frankly, I'm one of the millions who think that they didn't leave the Party, the Party left them.

And that makes a difference.  While I think that the GOP is the Stupid Party, when I look at what the Democratic Party has shrunk to, the only word that comes to mind is "evil".  I mean that quite literally.

They have sold their souls to those who used to be considered their worst enemies.  They've shaved much of their souls off, and burned them as an offering on the altar of Wall Street and the Banksters.

Where I came from, that used to be called hypocrisy.

I was trained not just as an Engineer, but as an Economist, and so I understand the theories of technological advancement displacing unskilled labor, and the theories of international trade and advantage.  Indeed, I've spent my career in an industry that has benefited from that trade and America's differentiated value as we built the Internet.

And yet I never forgot that Dad was born on a kitchen table, and grew up dirt poor in the Depression.  That runs deep, to my bones - which is why I'll never be a Republican.

And yet I look at the Democratic Party, the party of Silicon Valley, Hollywood and the Recording Industry, Wall Street and Goldman Sachs, and I want to vomit.  Bill Clinton destroyed the soul of the Party; NAFTA was only the start of a long and (literally) sordid list of betrayals where bit by bit, the Party's soul was gradually sliced off until the only thing left was appetite.

Repeat for the Bank bailout.  Repeat for the Federal Reserve monetizing the debt and causing an inflation that the Government no longer tracks (they changed how it's counted to make it go away).  Repeat for the EPA refusing new oil drilling permits and refinery permits, causing gasoline prices to double (oops, energy isn't included in the inflation indices any more).  Repeat for SOPA and the galaxy of Intellectual Property laws that would criminalize the Middle Class, saving the RIAA the expense of suing.

Now add in Obamacare which gutted the 40 hour work week, and the push for "immigration reform" - bringing in between 12 and 20 Million more workers that are willing to work for lower wages than unemployed former Working Class Americans.  Because the Powers That Be in the Democratic Party smell new votes.  Not Middle Class votes, but hey - eggs, omelets, right?

Add in the EPA and a thousand other regulatory agencies making it impossible to build a factory in this country.  The Chinese can have it up and running in six months, just like we used to - but the Democratic Party's environmentalist allies (and their allies in government agencies who benefit from this jobs killing red tape) have a monomaniacal drive for more, more, ever more regulation.  If that kills the working class then gosh: don't they vote Republican anyway?

And throughout all of this, you hear an endless litany of "the Democratic Party is the party of the little guy".  The biased Media never calls them on any of this.  And I (and presumably you) are racist wingnut h8trs because we see the betrayal for what it is:

Evil.  These are real people, with real lives and dreams.  Those are being destroyed by the Democratic Party.  The Democratic Party is impoverishing the Middle Class, all the while claiming to be sticking up for it.  I have data.

What's the Matter with Kansas?  What's the matter is that the good citizens there haven't strung up every Democratic politician from a lamp post.


My mother gave birth to me on the kitchen table that I ate off until adulthood.  I have always considered the humble conditions of that birth to be a distinction, one to be proud of.  In spite of the humbleness of that birth, I was able to become a university professor, author of several books and many articles, and to be blessed with marriage to a wonderful woman and father to three fine sons.  Having accomplished that from such a birth had given me bragging rights.

Dad made a shift from being a Republican to a pillar of the Democratic Party because of this.  I've made the shift away from the party for exactly the same reason.  I'm not cynical or evil enough to stomach what the party has become.

" I've made the shift away from the party for exactly the same reason. I'm not cynical or evil enough to stomach what the party has become."

We have much in common.
I was also a Lifelong Democrat but about seven years ago I started noticing really evil shit going on within the party and said See Ya's.
That was before I sobered up even. After I did finally get sobered up I was absolutely shocked at what was going on.

Yep, they left me a long damn time ago.

My question is why were you ever a Democrat?
Granted, my memory is not nearly as good as it was prior to the damage suffered, but I don't recall ANYTHING good associated with that party even prior to the Great Succession Attempt. Certainly nothing since then, especially the various Presidents. (I'm not a champion of the Republicans, but at least they weren't actively evil for the entire 20th century as the Dems were, and still are.)

Regarding the video, my first job out of college was at that plant as an engineer. I started in June of 09 and the union contract with the United Steel Workers came up for re-negotiation that summer and when the new agreement was signed it left the plant unprotected. That means the plant wasn't guaranteed to have work for the period up to the end of the agreement which has never not preceded a plant closure, and sure enough it was closed. If you want to lay blame for it closing, lay it at the feet of the ones who allowed the union to come into that plant and made it such a headache for Goodyear's management. The plant was 40 years and some change old and corporate probably would have invested in upgrading it if it hadn't been for the fact they could just shut it down and be rid of 2,000 people who demanded way more pay than they were adding value to tires. Yes, it's rough on the people of Union City but a good number of them brought it on themselves.