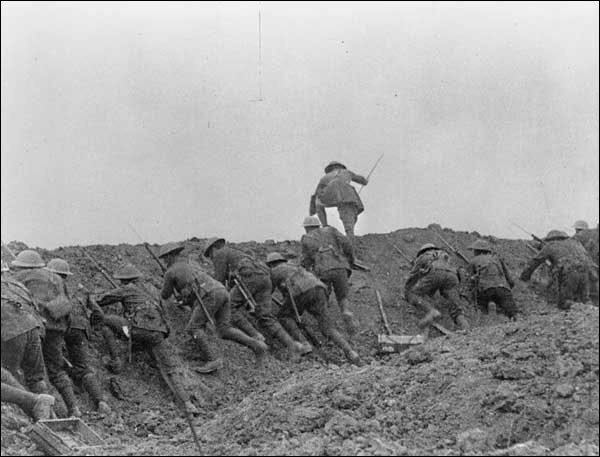 100 years ago on the Somme, the Royal Newfoundland Regiment got the order to go over the top:


At 8:45 a.m. the Newfoundland Regiment and 1st Battalion, Essex Regiment received orders to move forward.[20] The Newfoundland Regiment was situated at St. John's Road, a support trench 250 yards (230 m) behind the British forward line and out of sight of the enemy.[22] Movement forward through the communication trenches was not possible because they were congested with dead and wounded men and under shell fire.[23] Lieutenant Colonel Arthur Lovell Hadow, the battalion commander, decided to move immediately into attack formation and advance across the surface, which involved first navigating through the British barbed wire defences.[22] As they breasted the skyline behind the British first line, they were effectively the only troops moving on the battlefield and clearly visible to the German defenders.[23] Subjected to the full force of the 119th (Reserve) Infantry Regiment, most of the Newfoundland Regiment who had started forward were dead, dying or wounded within 15 to 20 minutes of leaving St. John's Road trench.[24] Most reached no further than the Danger Tree, a skeleton of a tree that lay in No Man's Land that was being utilized as a landmark.[25] So far as can be ascertained, 22 officers and 758 other ranks were directly involved in the advance.[25] Of these, all the officers and slightly under 658 other ranks became casualties.[25] Of the 780 men who went forward only about 110 survived unscathed, of whom only 68 were available for roll call the following day.[25]For all intents and purposes the Newfoundland Regiment had been wiped out, the unit as a whole having suffered a casualty rate of approximately 90 percent.

It is plausible that Newfoundland never recovered from the loss of so many of her sons that day, and other days in that War To End Wars.

Today is 'Canada Day' in Canada. What are we propounded on?? The wonders of immigrants and Chinese restaurants.

That's what's in the major newspapers. Tiresome, and embarrassing propaganda. No wonder no one buys papers anymore.


Everyday the news media brainwashes us that we have “multiculturalism”: Africa for the Africans, Asia for the Asians, White countries for EVERYONE! — all at the expense of this civilization. In the ‘multicultural’ PC hypocrisy of ‘diversity’, ‘Canadian heritage’, and ‘tolerance’ EVERYTHING is racial politics and ethnic activism — all the while pretending that none of it is


‘Canada’ is now just nothing– an empty, exploited shibboleth:

Another corporate entity advertising at sports events beside VISA, COKE, CapitalOne. RBC, and McDonald’s. Another ingratiating and condescending commercial on the radio, paid for at my expense, to propagandize for more government. Another business except I MUST pay for its services, cannot reject it and cannot go elsewhere.

It saddens me profoundly.

L C Scotty, that's quite a song. I heard it years ago, but with different lyrics.

Cecil, it's no different down here, sadly.