I sat down to put together a post about Memorial Day, and how it does (or doesn't) impact the majority of Americans other than a day off to fire up the grill,  And then I realized that I'd already written it last summer when I found myself sharing an airplane with a soldier flying home for the final time.

This was the view from the window on my plane, last weekend:

I'll reproduce here what I liveblogged from my phone:

My flight to Detroit just touched down.  The flight attendants came on  the PA asking everyone to remain seated when we reach the gate, so some  soldiers returning back to Afghanistan.

Then the Captain came on.  He said we were taking a fallen soldier home.  You could have heard a pin drop.

God Speed, whoever you are.  I can't imagine any thanks can possibly fill the void your family feels.

We're  at the gate, and the plane is clapping for the soldiers again.  Out the  window, you can see the cars lined up on the tarmac for our fallen  hero.  Everyone' crowded around the windows.

It feels like you're in church - that you're in the presence of something holy.

There was a boy no older than ten a couple rows in front of me.  When he saw this, he took off his baseball cap:


All weekend long I had the song running through my head that I posted on Tuesday:

All weekend I thought on what I'd written about how hard the Honor Guard duty must be:


This must be a tough duty, spending all day, every day welcoming home  fallen veterans.  It must take a special sort of personality to be  continually surrounded by grieving families, and to take that grief as  an inspiration to perfect the ceremony.  The respect they showed -  especially to Mom - was very moving.

It's strange, but after months leading up to Dad's death, and three  weeks now to process the emotions, that I wasn't ready for the emotions  that washed over me when the guard slow-saluted Mom, and then knelt down  to present her the flag.

This flag is presented on behalf of a grateful     nation  and the United States Army as a token of appreciation for your loved  one's honorable and faithful service. 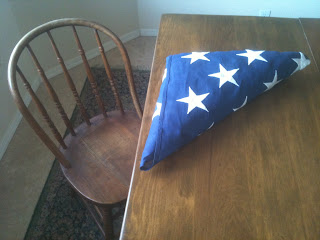 The Honor Guard has a hard duty, and one that may seem unimportant.   After all, it's just one more old man leaving his grieving family  behind.  The kindness and respect they devoted speaks volumes of them,  and the Republic.

This is the final test of a gentleman: his respect for those who can be of no possible service to him.

Last weekend wasn't an old man coming home to lie with his brothers, it was someone in the flush of youth.  Someone who didn't get the chance to bury his father; on the contrary, someone whose father met him on the tarmac on his last flight.

I look on this Republic, and wonder how it can possibly live up to that sacrifice.  And then I look at that ten year old boy on the plane, just some random kid on a vacation flight, taking his cap off as a sign of respect, and thanks.  And I look at all the other passengers who would normally be crowding the aisle to get off the flying bus that brought them where they ended up.  All crowded around the windows.  I don't expect that many will ever forget that moment.

Feels kinda like Church in here tonight.  Thanks to Libertyman for pointing out this song.  I posted it once, but this time it was up close and personal.

Sir, whoever you are, I'm honored to have been flying with a hero that night.
Posted by Borepatch

I held it together at Dad's funeral until the bugler played Taps.

I've been at the airport when those vehicles appeared. People in the terminal looking out, stop and the silence is noticeable. It's knowing that could be the family member of any one of us. It's knowing it could have been some of us. Choices made, duties honored, payment exacted for a world in which the good have to fight for the good of all.

I couldn't have said it any better. Thank you Ted.

Guys, I deserve no thanks today.

The soldier who flew home with me - and his family - yeah, they have thanks coming. More than I can imagine, and more than I expect they'll get in this degraded age of the Republic.

I really wish it was not so.

Rev Paul, I must say that it's still tough reading my posts about Dad. I can't imagine what it must be like today for the father I saw there on the Tarmac, waiting to welcome his son home.

How hard is Honor Duty? Very

Read about it here. It's in Pdf format and will auto download. Rocky Mountain news folded a couple years back but some noble sole saved the article.

Expect some dust in your eye.

Two years come this Labor Day we buried my Father-in-law. He did several tours in Nam, did from a rare form of thyroid cancer.
Went over to thank the Honor Guard and got to talking to them. They all said it was an honor, yet it was hard watching these men die. All of them, and me, had tears in their eyes.