The peasants are revolting

Why do Progressives hate the market, with a hatred that burns with the fire of a thousand suns?  Charles Krauthammer gets part of the way to the answer, but only part way.

The problem is that they self-identify with Plato's dictum that only Philosophers should rule.  The very name they use to describe themselves - progressive - speaks volumes about how smart they think most Americans are.

They are contemptuous of the intelligence of most Americans, which is why the favorite epithet of most progressives to say that their opponents are dumb.  George W. Bush was so incredibly dumb, although he never had a trillion and a half dollar deficit in a single year (not that he might not have tried).  Sarah Palin is so incredibly dumb - I can see Russia from my house - even though she never said that and even though she never accused the Poles of running Concentration Camps.

They're smart, and everyone who disagrees is dumb.  Just because.  They're the intellectual aristocracy, deserving of respect and honors.  Just because.  And so what should we predict to be the reaction of a progressive to the bankruptcy of the entire Main Stream Media in the face of record profits and viewership of Fox?  Incandescent rage that burns with the fire of a thousand suns, directed at the forces of a market producing results they don't like.

And thus they see this as confirmation that the American public is stupid, because the American public disagrees with them.  And that simply confirms in their own minds that they are indeed the vanguard of the Progressive Revolution (out in front, don't you know).  And that demonstrates conclusively the critical need for continuing subsidies for NPR.

That's the conclusion that Krauthammer didn't drive home.  Bringing up Fox News, or telling Nina Totenberg to "spend your own money" is speaking in a foreign tongue.

Sadly, the older I get the more I despair of ever being able to actually have a conversation with a progressive.  We don't disagree so much on policy details (well, we do, but that's much less important).  Rather, we disagree on first principles.  Specifically, I disagree that they're smarter than I am, and simply refuse to start a discussion from a position of "I'm so much dumber than you are."  Sorry, I just am not interested in any of that.

The Internet has been an epic disaster for the Progressive movement.  When your entire philosophy is built around smart uber alles, it must be very hard indeed to have your every idiocy exposed for the great unwashed masses to laugh at.  The peasants are, indeed, revolting. 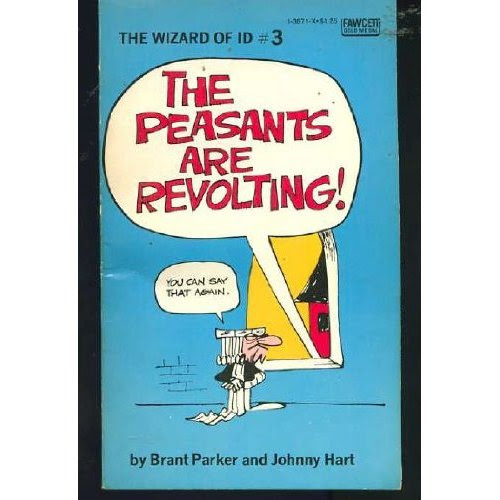 Somewhere I have that book...

But on topic: Why do "progressives" view themselves as so much better and smarter than everybody? Participation awards. Award them for accomplishing nothing and they will accomplish nothing forever.

Ancient Israel had a solution for people who made false predictions (like "spend trillions on stimulus and people will go back to work"). They stoned false prophets to death.

But I suppose that's not very progressive.

I have an IQ estimated at 220 (tests stop producing consistent results over 180) and I still don't think I'm as smart as they seem to think themselves.

It takes a substantial chunk of stupid to think yourself smart enough to run other people's lives.

Sadly, my first thought upon your post's title was "Wizard of Id, right?"

More broadly, your point that the internet is a great force for showing up Progressive pretensions is right on target. They have handicapped themselves by their long unchallenged control over the media and the subjects deemed suitable for public discussion. It's made them sloppy and easy to pick off.

But that state of affairs won't last forever. And we will need to recapture the high ground in education and culture — and hold them — for long enough that we carry out our own Long March through the institutions. See what Eric Raymond calls "mimetic warfare" http://esr.ibiblio.org/?p=260 .