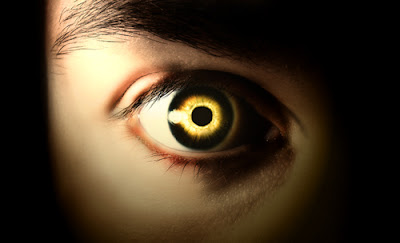 The light of the body is the eye: if therefore thine eye be single, thy whole body shall be full of light.

But if thine eye be evil, thy whole body shall be full of darkness.

I'm scared of demons. Not the metaphorical ones - the one that people say whispers just one more martini in your ear. Those are allegories, and allegory can't hurt you.

I've seen real demons, in someone's eyes, the window to their soul. Something is strange, and then there's a realization that something's there. Literally, the hair stood up on the back of my neck, and time slowed down as adrenaline flooded my system. My dog growled, and then fled. I don't blame him; I would have fled myself if I could have.

In ancient times, the poor unfortunate might have an exorcism performed. If he survived, he might be better, or maybe just ostracized from the community. In ancient times, that was probably a death sentence, only crueler and slower than the exorcism.

Today, we have psychiatrists, and what can only be described as wonder drugs. I remember ancient times, back around 1970. A man described how Lithium changed his life. But Lithium was delivered as a salt, because that was the only way the body could absorb it. I wonder how his life went, with the Lithium salts slowly poisoning his system. Now that I've seen a demon myself, I guess it beat the alternative. The drugs are a lot better now, but nobody quite seems to really understand what goes on with brain chemistry.

I remember how people talked about the "weird kid". It's better now, but not a lot. The worst is the realization that there's still that person that you know inside their body, but they're not there right then. The demon has pushed them aside. Shivering, afraid, trapped in a body controlled by a power not from this world.

Interesting, Ted. I'm happy to say that I haven't encountered a thing; your description made me shiver.

Been there, faced it down, more than once. Sometmes you just know that something else is there. Look in those eyes, and that isn't your friend anymore.