The Ghosts of Waco look down and smile 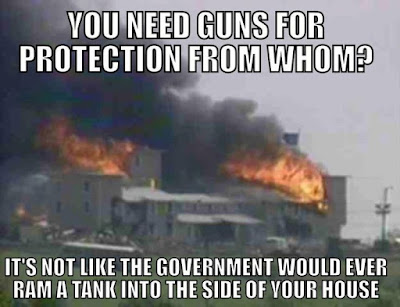 The only thing now is how bad is the next nominee gonna be. Are they counting on us saying the fight is over and not paying attention?

Like Person says about it:
"Gun owners were absolutely opposed to the Chipman nomination from the git-go, not only for Chipman’s gun grabbing proclivities, but also for things like lying about the Branch Davidians shooting down helicopters, wanting to ban the AR-15, and general hostility to both gun owners in specific and conservatives in general. "

You can bet being gun grabber, a liar, and wanting to ban AR-15s are going to be the DNA of the next nominee, too, because it's the DNA of the administration.

Excellent points SiGraybeard. AS to the next nominee, who knows? I doubt it will be anyone favorable to our freedoms.

Yep. It's "Dune" and the Harkonnens are in charge.

They've withdrawn Glossu Rabban (curiously nicknamed "The Butcher") and now who will Feyd Rautha be?

And what cruelty and evil will lurk under the 'good looking' visage?

Yeah, don't trust any of the elite, especially in this mis-administration.

You're being unfair. They only burned them all to death to protect them from David Koresh.

Sometimes, even Sodom and Gomorrah can scare up ten righteous men, and stay God's smiting for a span or two.

Watch their other hand.

The odds are, the sock puppet they replace his nomination with will be five times better at running below the surface, and ten times as bad in actual practice.

And recall that deputy Heydrich and arch-minion Eichmann were far worse than Himmler, in day-to-day practice.

What ever happened to all the Waco bikers the cops shot and locked up on million $ bail?

Chipman and others there that day with the ATF are all criminals that need to be locked up in a wooden structure and have it burned down with them in it. And even that is too nice of a fate for them.

The Waco issues was totally unnecessary.

HMS Defiant: All the charges against the Waco bikers were dropped because DA Abel Reyna cocked things up so badly, probably to protect overreaction from police.