The downfall of Czar Nicholas and the American Deep State

Big Country has a must-read post up.  Go read it now, then come back for my thoughts.  In it he lays out evidence that there is a three way power struggle going on between the Intelligence Community, the Pentagon, and the White House.  Peter adds some thoughts as well.

It reminds me of the last few years of Tsarist Russia: a war that was going poorly, indecisive leadership at the top that had no real idea what the citizens of the realm actually thought, and a fabulously corrupt and incompetent set of ministers who were more interested in looting the treasury than, you know, running their ministry.

And as to that last item, take a look at Joe Biden's cabinet (courtesy of J.Kb at Miguel's place).  It's deja vu all over again.  The last thing on any of these folk's mind is good governance.

And so, to BCE's post at the top.  The Biden Administration sure as shootin' ain't where the smart money is going to bet.  And so, on to the second of the three he calls out, the Dot Mil.  There are huge problems in our military, the biggest I've seen since the Vietnam days.  In a very disturbing way, the pathology is very similar: the senior officers give commands to a sullen and hostile enlisted force.  Back in the dark days of the '70s we had flag officers like Zumwalt (Navy) and Creech (TAC) who were able to reinstil discipline.  It sure doesn't look like the Perfumed Princes of the Pentagon are up to Zumwalt's (or Creech's) level.

And so I don't think that the smart money will bet on the Dot Mil, either.

So the Last Org Standing likely will be the Intel Community.  Heck, they already successfully overthrew a previous President, and guaranteed they have dirt on most of the players in Washington (Generals Petraeus and Flynn could not be reached for comment).

There really are only two questions.  First, how long will this take to play out?  The longer it goes on, the more damage the Republic takes (both externally and internally).  I can't say I'm optimistic that this will get sorted out soon.

Second, the Intel Community will want to rule from the shadows.  They are not Front Men - the acronym of one of the Three Letter Agencies was said to be "Never Say Anything".  Quite frankly, Joe Biden and Kamala Harris are the perfect empty suits for the Intel Community to stand up as "leaders" of the Republic - as they did last November.  The folks at Langley must be steaming mad that Biden isn't staying in his lane.  How this will play out is unknown, but unlikely to be pleasant for Joe, "Doctor" Jill, or Kamala.

Czar Nicholas came to a bad end in a basement in Yekaterinburg, along with his entire family.  Will our Checkists go this route to let the rest of Washington know they need to stay in their lanes, or will there still be more subtlety?  The nation wonders. 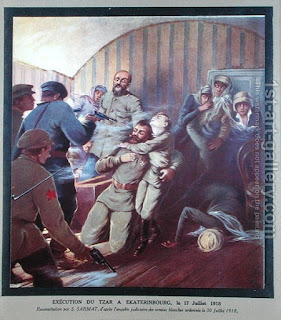 Labels: Commie bastards, Deep State, Eye of Sauron, police state, politics, The Decline and Fall of the American Empire, The decline of the Progressive West

It remains to be seen who is actually calling the shots at the Biden White House. I've seen different theories suggest it's one of:

It's always a mistake to think that all your enemies are on a single "side," or to lump "the Intel community" into one amorphous faction. There are probably factions within factions there. we just don't know about it.

This is also why I don't think the phrase "globalist" is terribly useful for describing various international forces arrayed against the Trump presidency.

Likewise, we're not entirely sure who is calling the shots at the DNC. The only thing we know for sure is that it's not the Bernie Bros.

The fun question is how long can this country survive an elite (regardless of which faction it may be) that disdains and undermine both this nation and a substantial portion, if not a majority, of the people living in it?

From folks on the 'inside' at Meade, there is a virulently active LGBT/woke movement currently sweeping the agency, driving out the actual analysts that know anything.

Borepatch, the reality is if it is a three way war, these eventually make their ways out of the shadow and into the public eye. Leaks will start occurring with more regularity as each side attempts to "enlist" the public on their side.

The complete and utter silence of the Blue Party on these issues is damning. And ultimately does them no good: they have given their opponents ammunition they will use for the rest of their lives.

Would the Republic survive such a cold Shadow War? I have no idea. Bonds are very frayed now, bonds that at one time could be used to draw us back together.

Probably the only other thing worth mentioning is I presume any and all intelligence is with foreign entities who wish us will and will use this information at precisely the wrong time to continue to stir things up.

You’re all out to lunch!

It’s the money men! The turdies in the three agencies are bought and paid for by various corporations owned by a small cabal of very rich men who are experts at laundering boggling amounts of money. They own the swamp and it dances to their tune. Their business model is beautiful in a murderous sort of way. When I was a kid the political left was about protecting the little guy from unscrupulous Big Business. Today the corporations buy their loyalty and allegiance, and liberals chit on the little guy all the time. I’m gonna come out of my cage and say it too: Jews have an inordinately large hand in this - just as they did when they murdered the royal family and replaced them with Bolsheviks. I don’t like it either, and I’m not suggesting we make soap out of them and mass murdering them, I am just calling them as I see them.

Your founding fathers and your ancestors were truly remarkable men. Thanks to them, Americans are not Russians. The American citizen is armed, informed, and won’t be cowed by the various thugs and grifters currently moving against us. Let us not panic. All that is required is a good house cleaning.

We now have a Praetorian guard - the FBI makes and breaks politicians at the whim of their Leftist masters. If they don't like you, you are guilty (never mind of what). If they like you, there was never any crime (despite all the bodies).

The problem with having front men is controlling them, especially in this kind of arena.
Additionally, there are overlaps and fissures in each community mentioned... If this leads to open warfare, it will be VERY messy with multiple sides "enlisting" others against their will, "punishing" the other side and their supporters, etc, etc.

Great post. Off topic(ish) but when the drunken, enraged Bolsheviks shot and stabbed the Czar's family to death the floor ran slick with blood, "like an ice rink."

Those same demons are living large here now and no wonder they hate Russia. But of course they hate everyone and everything. They'll be defeated, of course, but please let it be sooner than later.