Over at Miguel's place (I think it was J.Kb - hey guys, can you get a tag to show who posted what there?) we get a link to ravings at the UK Guardian about a Climate Change Final Solution:

The insane people at The Guardian published an article that sets up the historical precedent for that.

His empire lasted a century and a half and eventually covered nearly a quarter of the earth’s surface. His murderous Mongol armies were responsible for the massacre of as many as 40 million people. Even today, his name remains a byword for brutality and terror. But boy, was Genghis green.

Genghis Khan, in fact, may have been not just the greatest warrior but the greatest eco-warrior of all time, according to a study by the Carnegie Institution’s Department of Global Energy. It has concluded that the 13th-century Mongol leader’s bloody advance, laying waste to vast swaths of territory and wiping out entire civilisations en route, may have scrubbed 700m tonnes of carbon from the atmosphere – roughly the quantity of carbon dioxide generated in a year through global petrol consumption – by allowing previously populated and cultivated land to return to carbon-absorbing forest.

Killing 40 Million people for the planet.

This fiendishly clever plan of theres will indeed lead to a lower population because people like me will put .45 caliber holes in the foreheads of genocidal eco-fascists like the Guardian writers.  Think of all the compost!

Sheesh, it's like these people don't ever listen to what they say.  If they did, they might think something like "Hmm, am I sounding like a deranged, genocidal fascist?  Maybe we should focus on something incremental, like bike paths."  Instead, they'll talk themselves into my proposal, above.

And these morons probably think they're the smartest kids on the block.

And to show that this isn't a one-off, a "Black Swan", an oddball proposal - but rather a recurrent theme from the Genocidal Eco Left, here are some other genocidal Save The Planet sooper smaht plans that we've mocked here, dredged from the Borepatch archives:

Save The Planet - Starve The Children

Kill The Children For Mother Gaia

Kill The Dog for Mother Gaia

Oh, and that last one is a hoot - the link there goes to an article published in the Journal of the American Medical Association.  This sort of genocidal eco fascism is entirely mainstream in western medical establishments.  It seems that there must be some sort of education plan in action, to make all this easy to get along with.  Maybe something like this ... 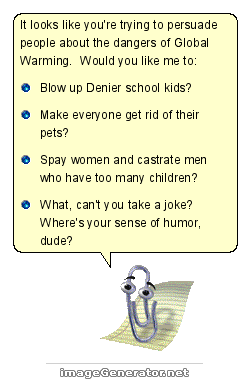 Labels: Bad Guys, best posts, Commie bastards, fascists, it's not easy being green, rants, The decline of the Progressive West

At GFZ, when you click on the post, in the view that also shows the comments and not the view that let's you scroll through the posts, you see the author at the top just right next to the publishing date.

Borepatch, these are the same fools that, in Genghis Khan's day, felt that the Great Khan would not kill them personally, just other people. A great many of them had a horrible reality check as well.

Joe and the Ho seem to be implementing Agenda 21 or whatever they're calling it nowadays (Agenda 2030?). Get rid of suburbs; force everyone into tiny apartments in densely populated cities so that cars can be gotten rid of. With nobody in suburbs or (God forbid) rural areas, those become "No Go Zones" No, you can't visit a national park, those are for the wild animals only.

The moderates want to kill off 95% of the human race. The extremists kill off around 99% of humanity. They're not going to be included, of course. They're better than us. Kill of us and our families.

This is outstanding. They must have had a boozy lunch, I can picture it...

Most of the land that Chingaz laid waste was in the Middle East and Central Asia and the way he did it was by freeing the slaves that maintained the irrigation systems. And it reverted to desert, not forest. They have never really recovered.

So the Guardian writers are not only genocidal maniacs, but also pro-slavery. And you know who they have in mind for the slaves. Next up, articles praising Hitler, Stalin, Mao and Pol Pot.

Within the United States, in the majority of jurisdictions, it is within the bounds of established law to apply lethal force in self defense under circumstances in which one is faced with "a direct and immediate threat to life or severe bodily harm;" regarding the attitude and statements of the Left, especially the "Genocidal Environmental Left" as you term it (which is not so gradually becoming the Left's majority wing), I wonder precisely how "direct and immediate" that threat needs to be.