44 climate doomsday predictions that haven't panned out.  Related: NYT said that US east coast beaches would all be under water by 2020.  "Paper of Record" ... (via)

Quite frankly, this sums up Global Warming prognostication quite well: 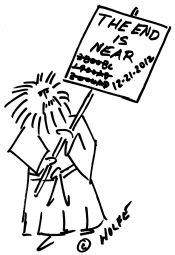 I've posted before about the record high temperatures that were seen in 1936.  As it turns out, that's only part of the story.  1936 was the year for "Climate Disruption" - and we've had 85 years of more carbon dioxide going into the atmosphere since then but haven't seen such record bad weather.  Hmmmm ...

In non-climate dumbness, here's a list of the top 150 intellectuals.  Color me unimpressed, although the biggest objection is the use of "intellectual" to apply non-perjoritively in this degraded age.  I would have expected Arnold Kling to not put Joe Rogan as high as #1, or Thomas Sowell as low as #71.  Hat tip: Chris Lynch who points out the list is silly.

That's on the money... I worked with real climatologists who said flat out that it was all BS for funding/donations/etc...

DailyTimeWaster had a nice 'before' and 'after' picture of a Roman port. Before is the port on the coast, after is modern times with the port a mile or two inland, due to "rising" sea levels...

Geez, that was an awful list. Somebody loves them some Never Trump grifters.

Whenever someone begins a conversation by self-identifying as an intellectual, I pretty soon tend to think they are mistaken.