159 years ago (well, last week) this was the view for my Great Great Grandfather (photo credit: The Queen Of The World.  Click to enbiggen):

It looks peaceful today, but 159 years ago it was a different story.  This is the Hornet's Nest at Shiloh Battlefield, looking west from where the 7th Iowa Infantry waited the charge of the Confederate forces.  My Great Great Grandfather stood there, and today I stood on the same ground.

The 7th  Iowa was at the center of the line.  This is what Great Great Grandfather would have seen looking to his right: 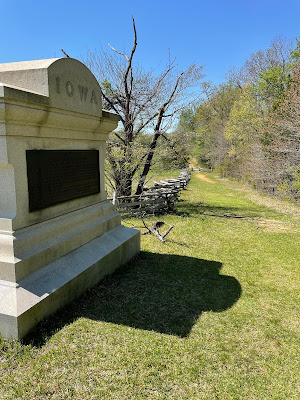 Peaceful today, not so much that day.  This was the view the other way: 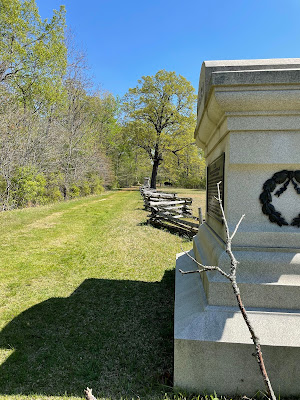 Then all hell broke loose.  After 4 brutal hours, the 7th Iowa was forced back, regrouping at Grant's "Final Line" where they held the southern forces.  Barely.  Not all of the Union soldiers in the Hornet's Nest fared so well - 2,500 were surrounded and surrendered.

It was quite a feeling walking that ground today.  Great Great Grandfather was a Kansas boy back when the war broke out.  Kansas wasn't a state then and so he couldn't sign up, so he and his buddies went north to Iowa where they enlisted in 1861.  He went all the way through the war - Ft. Donaldson, Shiloh, Atlanta, Savannah, Columbia, Bentonville.  He marched in the parade in Washington D.C. and was mustered out.

On the drive back, The Queen Of The World wondered about all the men who died there.  None of them have Great Great Grandsons to remember them, because the war took from them everything they had and everything they would ever have.  I would quote from Abraham Lincoln's justly famous letter to Mrs. Bixby, but Mr. Lincoln is perhaps uniquely responsible for all those deaths, and that lack of descendents for all those men.

I also wondered on that drive back why I consider Grant to be a sympathetic character.  Long time readers know my opinion of Mr. Sherman, but for some reason I can't shake a somewhat favorable impression of Grant.  I need to do some pondering on this.

But like I said, it was a thrill to walk in Great Great Grandfather's footsteps on that battlefield.

The past isn't dead.  It isn't even past.

Labels: America, Deep Thinking, history, me me me, military stuff, Queen of the World, The War Between The States, travel

My great great grandfather was an artilleryman in Carpenter's Battery in the Army of Northern Virginia. He was wounded by counterbattery fire on Benner's Hill, north of Gettysburg. I have walked that ground. He spent the rest of the war as a teamster.

Glad you had good weather for it.
Be safe and God bless.

As we drift toward CW2, I have been thinking and reading a lot about CW1 lately. As I have said before I share your opinion of Lincoln except I am even more negative.

Sherman is an difficult case. I had a great grandmother whose first childhood memory was of her dying older sister requesting some molasses which was unavailable because Sherman's troops had stolen or destroyed all of it. That memory stayed with her until she died in the 1950s. Given where she lived, it may not have been organized troops. Perhaps foragers or perhaps bandits in uniform both of which Sherman's army spun off. Sherman's defense of this and other depredations was that it was necessary to end the war and that ending the war was to the ultimate benefit of both North and South. Judgement call I guess. Pretty similar to the arguments about using the atomic bomb.

Grant's reputation, other than winning the war, is based on his memoirs. Like all memoirs, they are self-serving but they are extremely well written. Mark Twain said they were the only work ever produced by a US president to have actual literary value. I have seen nothing in the century since Twain's death to contradict this judgment. Grant ignores or glosses over such issues as his drinking problem, being surprised at Shiloh and his support of Meade's misjudgment at the Battle of the Crater. On the other hand, he expresses remorse about the Mexican War, his infamous anti-Jewish order and the second day at Cold Harbor. The usual criticism of Grant centers around the bloodbath of the Overland Campaign. This is unfair I think as the goal was to pin Lee down and eventually drive him into the trenches around Richmond (Lee knew it too and deployed all his considerable talents to avoid this.) so Sherman could do his thing without interference. In this he succeeded but it brings us full circle back to Sherman.

I walked the line where Missouri troops fought at Vicksburg. My kin would have been there, but he was captured at Corinth, MS. I've not made that trip yet. It's on my to do list.

He walked back from a PW camp in Ohio.

I still remember my great aunts talking about damnyankees. Those words were never separated when they spoke them. The more I've studied, then less regard I hold for Honest Abe. He ran amok. And I still feel funny holding a 50 dollar bill. How weird is that?

I spent some time at the Goliad Massacre site the other day. Asking myself the hard questions.

The past isn't dead. It isn't even past.

Who knows, BP. Imagine your great great grandson trying to get an objective idea about Donald Trump. Comrade Misfit will tell you he killed and ate babies and murdered millions with the cold and flu! 😆👍 Up here where the Usual Suspects control the narrative, Abe Lincoln walked on water. (As did FDR). I was astonished to learn the truth about both men years later. It was all stuff of public knowledge and historical record that our public educators chose to leave out. My personal view of Lincoln is that he was just swept along with current events like the rest of us, powerless to do anything meaningful. I am not sure it was Booth or karma that caught up with him in the end.

I’ve begun to hang out with crime-thinkers and it’s bizarre. Once you see the holes in the narrative, you can’t un-see them. You begin to look at the folks pushing those narratives and wonder what else they lied about. Did the wrong guys win CW1? Or the Second World War? The cases can be made. I now discard the general accounts of such contentious conflicts, because I do not trust the integrity or the objectivity of the official raconteurs.

We must always remember that the 'history' is written by the winners, not the losers...

"We must always remember that the 'history' is written by the winners, not the losers..."

No. History is written by both sides, but the winners control the narrative. However, it is up to YOU to suss out the truth from sources that are, and have always been, freely available.

I disagree. Jeff Davies also had a hand in it, but that's okay. Reasonable men can disagree.

My great, great grandfather was in the Union army first with the 15th Kentucky and then the 17th Kentucky infantry. He was at Shiloh and served on through the western campaigns until the battle of Missionary ridge in the Chattanooga, where he was wounded.

Fun fact: Every single Confederate state - with the lone exception of South Carolina - fielded at least one regiment in the Union Army. Some, like Tennessee and North Carolina, fielded enough to form a brigade.

I have read the memoirs of Ulysses S. Grant.

Unlike most 19th century prose, he is an easy read. It's well worth your time.

Also, unlike most CW generals, he didn't have an overinflated view of himself. He speaks freely of his mistakes and regrets - like the second charge at Cold Harbor, and trusting his underlings too much at the battle of the crater. He credits his lieutenants like Sherman and Sheridan for his success. He also credits Lee for being a master tactician and knew early on that he had pin him down outside of Richmond so his other generals could have a freer hand down south. Right after taking command he said: "I saw right away that the war could not be won in the east, but it certainly could be lost there."

Sherman was a hero. He was one of the very few Northern generals clear-headed enough to see what must be done to win the war, and talented and hard enough to do it. He later was sent out West to handle the Indian problem in much the same way. And so he did.

@McChuck What you said is why the stuff about Sherman as racist is complete BS. Yeah, his Indian campaigns were harsh but he did exactly the same thing to white Southerners. Same with Sheridan.
@Roy I suspect most of those Union regiments from the South were black troops. Tennessee did have some white regiments, perhaps some others. Indians fought on both sides too but they were generally from Oklahoma which was not a state yet. Kentucky and Missouri and Maryland had regiments on both sides too but they never seceded.

Richard, you would be mostly wrong, but not in every case. However, most of the black troops mustered into the Union Army were part of what was called "United States Colored Troops". They were not designated state troops. If you go to any Federal cemetery where black troops from the CW are buried, instead of a state designation, you will see "USCT" carved on their tombstone.

(The Captcha here seems to have a thing for traffic lights.)