Tam caught sight of a Citroen 2CV in the wild, which is pretty cool.  But it was only one of the very many cool products to come from Andre Citroen's french autoworks, and highlights the importance of culture (both the corporate and national variety).

Let's talk culture.  Andre Citroen was a graduate of L'Ecole Polytechnique, France's foremost technical university.  It's influence there is sort of like what we would see here if MIT, Stanford, and Cal Tech merged.  It's graduates have always been a big deal in France, and Citroen was kind of the poster child for that.  He put his company on the map with the Traction Avant, the first unibody car (introduced in 1935).  It's gorgeous exterior hides just how revolutionary its design was: 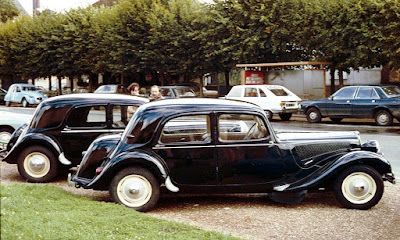 The unibody construction is unremarkable today, but this was 85 years ago.  It meant that the car sat lower because there was no chassis platform.  This lower center of gravity made the handling better, and the Traction Avant had a reputation as a getaway car beloved of gangsters of the day. 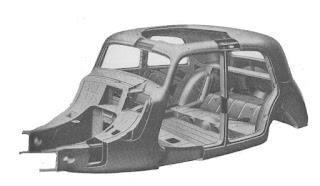 But there were two other innovations: front wheel drive (hence the name: "Traction Avant" means forward traction) and hydro-pneumatic suspension.  This last is an alternative to leaf springs: 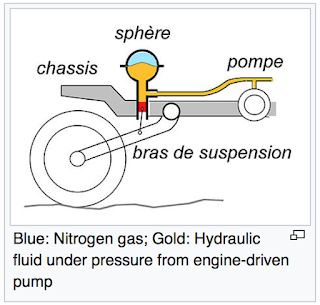 Here's where culture comes in.  Hydropneumatic suspension is very clever, and much superior to springs - so much so that Rolls Royce licensed the design for its Silver Shadow, and it is used today on the British Challenger tank.  However, it's complicated, with a lot of parts compared to a spring.  This is both very French and precisely what you would expect from a Polytechnique grad.  That culture (what The Queen Of The World calls "complicating a cornflake") is why the design remained mostly confined to France.

But here's a story from my young days.  A friend's parents had one of Citroen's later models, the DS: 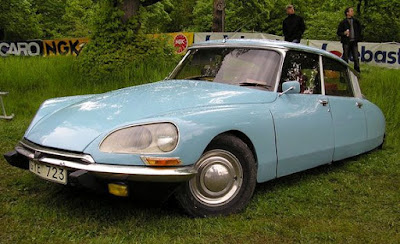 You could drive this on only three wheels - the dealer actually did this and was stopped by a cop who ultimately realized that there was no law against doing this.  The car didn't even come with a jack - if you needed to change a tire you just raised the appropriate wheel off the ground using the hydropneumatic suspension.

It was entirely revolutionary, have superior results, and was overly complicated.  In short, it was very french, and neatly sums up why those people simultaneously charm and irritate us here.

But there's no way to describe the engineers at Andre Citroen's company as anything other than genius.  The 2CV, the Traction Avant, and the DS were revolutionary.

Labels: are you pondering what i'm pondering, classic cars, europe, i am a nerd, made of win, Queen of the World

And the one with the Maserati engine was FAST!!!

Knowing about the technology is wonderful, but...
The Traction Avant first attracted my attention because, like the 30's Ford Victoria, it was gorgeous.

Graybeard, that it was.

We bought our first Citroen in 1957, straight from New York City. All the dash controls were labelled in French. It was like a spaceship compared to other cars from that era. Front wheel drive, disk brakes, hydraulic everything, radial tires, one spoke steering wheel and more. The engine was under powered, but zut alors it was a hemi!

To change the tire, you would raise the car up all the way, then place the jack stand on its hook and lower the suspension. Et voila, the side of the car picked both its wheels off the ground.

We owned three more through the years until they stopped bringing them in. I see Jay Leno is a fan as well and has a few in his collection. If there is a better riding car, I have not been in one. Tres, tres French as you say.

You mean the Germans weren't the only to fall in love with overly complicated machinery? Quelle Suprise!

Hydro suspension is great, but it looks like there's no backup.

In "Tinker Tailor Soldier Spy" one of the guys drives a Citroen. In the runway scene, you can see it squat when he stops. I was always curious why it did that. Then it rose when he accelerated away. Makes sense with a hydraulic pump... Very cool car.

When I was stationed in Germany in the 80's, I saw those car a lot and compared to the "German" cars I saw, they definitely were different, and they usually had the "Amber" or Yellow Headlights showing that the car was a French registered vehicle in Germany. Definitely different.

We had to change the front wheel bearings in an SM once. We got the metric bearings at our local bearing supply, saving several hundred dollars for the customer. The staked nuts on the end of the spindle were only a few dollars each. BUT....they were torqued on to NINE HUNDRED ft/lbs!

We had to rent a little gearbox/torque multiplier from the dealer to do it, but fortunately they only charged $20 to rent it.

Wonderful cars when running right, but difficult to work on.

One of the eternal mysteries about France is how many fields they pioneered in and somehow in the end managed to lose out to the Brits, Germans, or Americans. Automotive, aeronautics, even military. When I visited the museum at Kittyhawk they had a hall showing pioneers in aviation with a focus on technical achievements. Lots of them were French.

I blame their government-centric approach which has been a thing at least since Richelieu.