The dog that hasn't barked in this situation is Donald Trump - he hasn't taken to Twitter to stir the pot.  That's interesting.  Why not?

The last week has been wall to wall media coverage about Roy Moore in Alabama.  Whether you believe Moore or his accusers, the coverage has been relentless.  It's been quite a bi-partisan display, as politicians from both parties have condemned Moore.  And now along comes the Franken accusations, which seem much more credible.  Again, ignoring whether you believe More or his accusers, Franken has admitted it - he really didn't have much choice, as there's photographic evidence.

But silence from @RealDonaldTrump.  Again: why?

Assumption #1: both parties would like to impeach Trump.  The Republicans are increasingly willing to openly oppose him, and it's clear that the GOP establishment would like to see Trump and his supporters just go away.  Some Democrats actually introduced a bill of impeachment, which seems to be "Trump is a boor".  The pile on of Roy Moore is this same desire in a minor key.

Assumption #2: I believe that the Democratic party would throw Franken under the bus in a New York minute if they thought it set the stage for an impeachment of Trump.  After all, the (Democrat) Governor of Minnesota would appoint another Democrat, so there's no change there.  And yet, there have been precisely zero calls for Franken to resign.

Again, the interesting question is why.

I believe that there's another show waiting to drop, and that shoe is the secret payments made to victims of Congressional sexual abuse - payments that it is said run to the millions of dollars.  This is bubbling just under public consciousness, with brief mentions in the media but no real attention being  given to it.  If the Democrats were to try to force Franken to resign, this might break the dam on the broader Congressional corruption issue.  Nobody on Capitol Hill wants to go here.

I believe that if Congress decides to get serious about impeaching Trump for moral turpitude, you'll see Trump's tweets push  this issue front and center - his argument will be that if he is so bad that he has to go, why don't they go?  Since Congress is about as popular as herpes, this argument might have some legs. 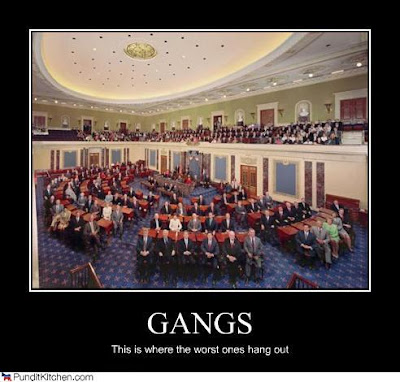 The whole situation is breathlessly cynical all around, so much so that Trump looks like the guy who's clean.  Pretty wild - every time I think that my assessment of Congress can't be any lower than it is, they up and say "hold my beer".
Posted by Borepatch

What I would like to say about Franken would not fit in your Family friendly blog. Bad words and all that. But some of us here in Minnesota, outside the blue cities of Minneapolis and St. Paul, would love to see him go. But Markie Dayton would pick someone as bad or worse to replace him. And he has a crop of Loons to pick from.

There might be a temporary appointment, but we'd get a special election as well. Minnesota is a pretty purple state, and remember that Franken won his first term by the skin of his teeth (and magical trunk ballots(tm)).

I think the angry disenfranchised beat the lazy franchised.

I think this is also the reason Joe Biden has come out and said he's not running in 2020. Even though he's trying to sell his book and the 2020 speculation would help with sales Biden also knows that a potential 2020 run would open him to more scrutiny and creepy Uncle Joe doesn't want that.

"Since Congress is about as popular as herpes..."

How dare you sir compare that virulent evil to something as benign as herpes.

Herpes just wants to live and reproduce, Congress on the other hand wants to control everything and everyone.

"...so much so that Trump looks like the guy who's clean."

Trump's the only one who hasn't been a politician his whole life, that might have something to do with it.

In fact this was the first time in his life he ran for any office, pretty good showing for first time out.

I've worked for DC for years, so I can't ethically comment. But let's have some culpability for once.

Y'know, it's beginning to look like Ripley was right all along.

Vote em ALL out and start over... WITH TERM LIMITS... sigh

Let me tell you some stories under the cone of silence about some of the "saints" on the hill.

And if Congressional sexual predation is an unspoken presence, don't forget the 800 pound Donkey in the room: The former Sexual Predator-in-Chief William Jefferson Clinton. No Democrat (understandably) wants to go there.