Rather than working on the house, we took the motorcycle out.   Roswell to Jasper on the back  roads is about as pretty as it gets, and I need to get more miles under the wheels. 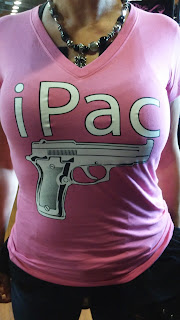 Not what  you'd expect to find in Massachusetts, but par for the course in the north Georgia hills.


Then on to Rocco's bar where there were a dozen bikes parked out front and a Blues band playing B. B. King inside.  They were crazy good - it seems like local boys who like to get paid to have fun.

And yes, it was we that rode.  Co-blogger ASM826 was wrong when he said there are no women who want to meet men on the Internet.  Her kids call her the "Queen of the World" because she told them when they were little that all the fireworks on July 4 were because of her birthday.  Yes, she has as strange a sense of humor as I do, but we both seem to roll with each other's foibles.  And she likes to ride with me.

Pretty good excuse to play hookey if you ask me.  Sure beats painting the living room.
Posted by Borepatch

Called out by my co-blogger. I hang my head and slink away.

LOL, glad y'all had a good day!

And from my limited "Biking Days", I agree that having another rider with you is always fun!

As on any trip, watch out for those curves!