Al Gore: this Soviet plan for high-density cities is awesome

And it will only cost $90 Trillion!


To stop climate change, Al Gore wants to spend a mere $90 trillion rebuilding all of the world’s cities so that everyone is living in such high-density neighborhoods that they don’t need cars. While a few curmudgeonly types might think that $90 trillion sounds like a lot of money, it really isn’t, say Gore and former Mexico president Filipe Calderon. After all, the world is probably going to spend the $90 trillion on something in the next few years anyway, so what’s wrong with spending it on this?

Gore made the proposal at an economics conference in Davos, Switzerland attended by billionaires who fly in on private jets so they can tell other people they need to get used to consuming less. Of course, neither Gore nor the other millionaires and billionaires at the conference expect to be stuck living in a high-density apartment any time soon.

This reminds the Antiplanner of The Ideal Communist City, the 1965 book that is now available for free download thanks to a group called Agenda 21 Today. In order to avoid the sprawl and traffic congestion found in those inefficient western cities, the book proposed that the Soviet Union build cities of high-density apartments allocating “not more than 225 square feet per person” to each apartment. 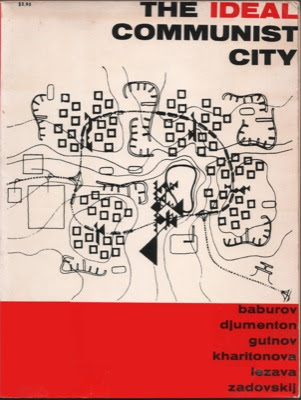 Click on the image to read a review of this book.

That’s exactly what the soviets did, with the result that Moscow today is the perfect smart-growth city: high densities throughout surrounded by a rural countryside.

So how'd that work out for the Soviets?  And how will today's young urban hipsters react?


As it turns out, a recent survey by the National Association of Home Builders finds that even most millennials don’t want to be stuck in cities for their entire lives, the way most Soviet comrades were. While some may say the home builders are biased, they have a strong economic interest in finding out what kind of housing people are willing to pay for, so they are no more biased to the suburbs than the market as a whole.

I can't imagine what a disaster that man would have been as President.  He lives in Cloud Cuckooland.
Posted by Borepatch

Labels: idiots, intellectual left, it's not easy being green, The decline of the Progressive West, us vs. them

You can have my garden and chickens when you can pry them from my cold dead hands!

It's just an excuse to try and get control. The world is full off petty tyrants who'd love to be able to tell you how you should be living your life.

And all of them think its for your own good. Even Hitler thought he was doing what he did for the good of the German people.

You can't staunch the desire for totalitarian altruism.

I am so glad that he never took power. Not the George Bush was great, but seriously - the lesser of two evils is still the best bet.