No global warming in 18 years and 3 months

Based on the RSS satellite data set: The hiatus period of 18 years 3 months, or 219 months, is the farthest back one can go in the RSS satellite temperature record and still show a sub-zero trend.

This is the "hiatus" that is causing considerable discomfort among climate modelers.  The models have not predicted this pause in warming, casting doubt on the model's ability to accurately predict future temperatures: 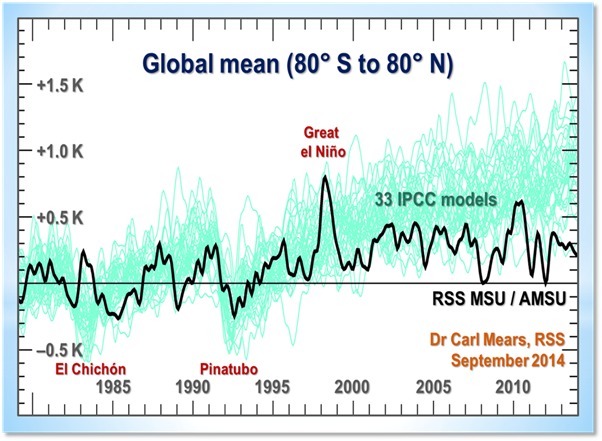 Figure 5. Output of 33 IPCC models (turquoise) compared with measured RSS global temperature change (black), 1979-2014. The transient coolings caused by the volcanic eruptions of Chichón (1983) and Pinatubo (1991) are shown, as is the spike in warming caused by the great el Niño of 1998.

I have been posting for years on the questionable quality of the climate data sets, where data is "adjusted" via poorly explained methods.  The Satellite record has a number of advantages that make it (IMHO) the gold standard:

1. It is truly global (well, from 80°N to 80°S), as opposed to only recording temperatures where there is a permanent weather station.  One major complaint about the surface record is that most of the stations are located at airports and that urbanization and growth over the last 50 years has led to an "Urban Heat Island" effect as cities and their airports pave over what used to be grassy fields.  Concrete and asphalt give very different temperature readings than fields do.  The satellite records temperatures all over the globe, not just at airports.

2. Data are automatically gathered at regular times.  Some of the surface data sets (especially the "High Quality" HCN) do this, but not all stations contributing to many of the data sets do this.  "Ghost readings" occur a rather dismaying number of times; the satellite record does not have this shortcoming.

3. The raw (unadjusted) satellite data is made available each month.  Most of the climate data sets only provide adjusted ("value added") data.  I'm quite uncomfortable with the idea of changing the data after they are recorded, but this goes on all the time - but not in the satellite data sets.

The downside of the satellite record is that it only goes back to 1979 when it was brought online.  Still, this is closing in on half a century of data which is certainly enough to give us a view of what's happening right now.  What's happening is that nothing is happening, which is not at all what we had been told would be the case.

Oh, and the kicker?  There's more than a "hiatus" problem, there's also the "divergence" problem where the surface temperature data sets are increasing much faster than tree ring data sets.  Remember "hide the decline"?  The tree ring after 1960 was removed from the scientist's analysis.  Why was it removed?  Because it showed temperatures dropping.  Berkeley's Dr. Richard Muller (who believes in global warming) explains how the scientists hid the decline:

The "Science is settled"?  Not at all.  The Science is a mess, and getting messier.

One of my scientists is the former chief scientist at JHU on that bird. He's always said there IS no globull warming...

I believe the intent is to destroy Science and remove it from its elevated pulpit in the public consciousnesses, so the neo-Akkadian's can re-continue with plant, animal, and fire worship on the old stone altars.
Human sacrifice is required, not optional!