Models, Scientists, and the End of History

The strongest evidence for the theory of Anthropogenic Global Warming comes from climate model predictions. Not everyone is impressed with the software, though. Some of the strongest criticisms come from some pretty high powered scientists:

Here I am opposing the holy brotherhood of climate model experts and the crowd of deluded citizens who believe the numbers predicted by the computer models. Of course, they say, I have no degree in meteorology and I am therefore not qualified to speak. But I have studied the climate models and I know what they can do. The models solve the equations of fluid dynamics, and they do a very good job of describing the fluid motions of the atmosphere and the oceans. They do a very poor job of describing the clouds, the dust, the chemistry and the biology of fields and farms and forests. They do not begin to describe the real world that we live in. The real world is muddy and messy and full of things that we do not yet understand. It is much easier for a scientist to sit in an air-conditioned building and run computer models, than to put on winter clothes and measure what is really happening outside in the swamps and the clouds. That is why the climate model experts end up believing their own models. – Freeman Dyson

Computer models are interesting, but the proof of the pudding for skeptical scientists is in whether the model predictions match the observed record. So how do the models hold up to observation? It depends on which observations. For example, NASA's GISStemp data set says that the model predictions of sudden late 20th century warming to unprecedented levels doesn't match the observed record of peak temps in the 1930s, followed by a decline through the 1970s, with a minor El Nino spike in the 1990s: 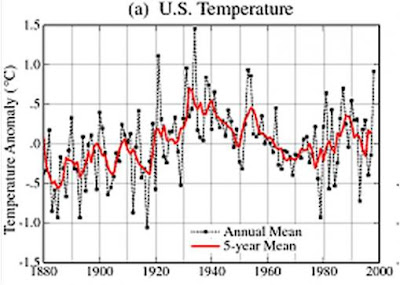 This is a problem for scientists who have to respond to skeptical eminences like Dyson, or Nobel laureate physicist Ivar Giaever:

I’m a skeptic. …Global Warming it’s become a new religion. You’re not supposed to be against Global Warming. You have basically no choice. And I tell you how many scientists support that. But the number of scientists is not important. The only thing that’s important is if the scientists are correct; that’s the important part.

So what do the "warmist" scientists do? Remember, Gavin Schmidt - one of the most important advocates of Global Warming - runs the NASA group that maintains the GISS data set. Some time between 1999 (data from 1999 used for the graph above) and 2000, something happened to GISStemp. Now if you look at the data, you see something very different:

Older temperatures (1880 to 1920) were reduced. Recent temperatures (1990s) were increased. Instant Hockey Stick - just add data "adjustments". So which one is wrong, the old GISS or the new GISS? Is there some other data that we could check that could help decide the question? Other climate data? Like snowfall records? 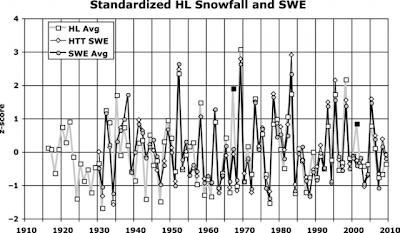 I wrote about how easy it would be to manufacture a consensus that the globe is warming:

What is clear about the HadCRUt (as well as GISStemp) is that they are opaque - the data sets are terribly hard to understand, poorly documented, and adjusted in a manner that is not well explained (if, indeed, it is explained at all). In the case of CRU, the original (unmodified) data is no longer available, but seems to have been destroyed.

Yet ever single climate scientist uses these data sets for their analysis of global temperature.

So, if the guardians of these data sets were to want to ensure a scientific consensus that the globe is warming, that this is a recent phenomenon, and that mankind is behind it, all they need to do is modify the data sets. All researchers pick up the modified data sets, have no (easy) way to validate the soundness of the data, and unsurprisingly produce similar results. Hey, the data show conclusively that the planet is warming. Oh noes! Thermageddon!

There was a joke, back in the bad old days in the Soviet Union: In Soviet Russia, future is always known. Is past that always changes.

The scientific establishment acts like they think that they've reached the End of History, and that controlling the past allows them to set the future. The problem is that the world is no longer one of central, top-down information distribution. Now it's the Internet, where you can't disable comments. That same Internet that considers censorship to be damage, and routes around it.
Posted by Borepatch

On a somewhat related note. I seem to be hearing a lot of "2010 is the hottest summer in recorded history" chatter lately.

I don't know if that's true or not, but I do know that one hot summer is not an indicator of climate change, it's an indicator that it's a hot summer.

It seems that some people are confusing the two either by accident or on purpose. When it comes to climate change hysteria, I don't believe in accidents or coincidence.