The most disturbing aspect of the whole Global Warming science debate is how raw temperature data is artificially adjusted, and how this modification seems to account for most or all of the reported warming. Well, it looks like we can now add a selection bias, too. Only a third of the available weather station thermometers seem to be used in the CRU data set (the one relied on by the UN IPCC).

So what happens if you include all the thermometers? What does the planet's temperature history look like?

First some quick background. There will be a short quiz at the end, so please pay attention:

1. The UN IPCC reports use data from the University of East Anglia's Climate Research Unit (CRU). The CRU guys, you will recall, are the folks behind the ClimateGate scandal.

2. The CRU data set (CRUTEM) contains data from 1741 weather stations (this is listed on their web site, or was before the web site was taken down during ClimateGate; I haven't checked to see if it's back up).

3. CRU does not directly collect weather station data. Rather, they collect it from organizations who do. The controversy over Freedom Of Information Act requests being denied due to confidentiality agreements with some of these organizations was what helped launch ClimateGate.

4. However, 1643 stations in the CRU data set contain the same station IDs as stations in the US Government's Global Historical Data Network (GHCN) data set. We know that GHCN is a major contributor of station data to CRU. 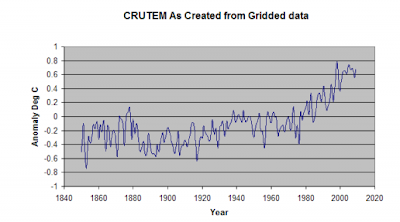 There is a pronounced warming signal after 1960. Remember, this is a subset of the 4495 stations, and it is adjusted, not raw data.

So what does the raw data look like for all 4495 stations? 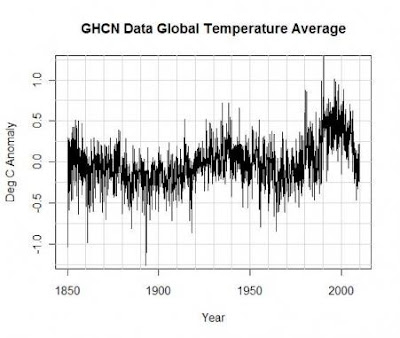 Let me say this simply: The raw (unadjusted) weather data from the largest historical data set shows no warming for the last 150 years.

So what do you do if you're a climate scientist who wants to show warming?

1. You select a subset of the weather stations - the ones that show some warming (most of these likely would be due to increasing city size, where the "Urban Heat Island" effect - cities are hotter than the surrounding countryside). Remember, the Russians say that CRU did precisely this, and have specifics about which Russian stations CRU included and which they didn't.

2. You add poorly-explained "adjustments" to the raw data, to increase the recent recorded temperatures. Or just make it all up.

3. If anyone asks you about this, say that "the science is settled", that anyone who hasn't published in "peer reviewed" journals can STFU, and that people who "deny" global warming should be jailed.

Remember, I said that there would be a quiz. To make it easier, I'll make it multiple choice: 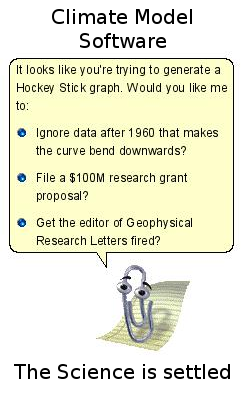 UPDATE 4 January 2009 15:29: I forgot that I posted about this sort of weather station "cherry picking" months ago.
Posted by Borepatch

So why are the night time lows for Raleigh and Boston the same this week, eh? Where's the science to predict that?

It's like New Hampshire around here. She's been putting logs in the stove like she was stoking a locomotive.

If you got some global warming somewhere, send it here.

there's a little warming, 0.25ish using my mark-1 eyeball fit. Seeing as 1850+/-25 marks the end of the Little Ice Age, we expect to see some warming, and most of the sceptical scientists I've been reading are leaning towards 0.7 of total warming.