The Right Sort of people are losing their minds:

For me, at least, it’s hard to read any of the literature of [the 1920s and 1930s] without getting a potent sense of déjà vu. The same autumnal sense of an era past its pull date, the same spectacle of people and institutions going through motions that stopped functioning a long time ago, the same plaintive voices wondering why the world just doesn’t seem to make sense any more—it’s all present and accounted for, the familiar backdrop for the last few decades of public life in the United States and a good many other industrialized nations. The sole remaining questions are what combination of crises will topple the hapless ruling class from its position, and how soon that inevitable moment will arrive.

Yet admitting that the managerial class has turned out to be incompetent at running societies is unthinkable, to members of that class. It’s not just a matter of status panic, either. The entire collective identity of our managerial aristocracy is founded on the idea that they’re the experts, the smart kids, the people who really know what’s what. They justify their grip on the levels of collective power by insisting that they and they alone can lead the world to a sparkly new future. That’s the theme of the slogans under which they seized power, and it remains the core of their ideology and their identity: “We can make the world better!”

This is John Michael Greer, who used to blog as The Arch Druid.  He seems pretty optimistic that the wheels are finally coming off of the Managerial State and that this is probably a good thing:

For the last six years now, accordingly, the failures of the managerial class have become a massive political issue across much of the industrial world. Britain’s Brexit referendum and the 2016 US presidential election both marked important turning points in that process, as significant numbers of ordinary people decided that the experts didn’t know what they were talking about and refused to vote as they were told. The various tantrums thrown by pundits, politicians, and self-anointed influencers since that time haven’t accomplished much, aside from convincing even more people to ignore the increasingly shrill demands of a failing elite.

That’s sending waves of stark shuddering terror through the managerial aristocracy. If the deplorable masses stop bending the knee and tugging their forelocks whenever one of their self-proclaimed betters mouths a platitude, after all, how long will the authority of the managers last? That terror, in turn, gives rise to the displacement activities discussed above. Since it’s impossible for them to admit to themselves that they’ve failed, much less that everyone else is aware that they’ve failed, they find other things on which they can focus their feelings of panic. The Covid virus is one of those. It wasn’t the first and it doubtless won’t be the last, but it’s serving its purpose now, which is to allow members of the managerial class and its hangers-on in the media and the academy to distract themselves from the end of their era of power.

Peter thinks that they are trying to crash the airplane into a mountain - create enough starvation and impoverishment that a desperate population turns to them to fix the crisis they created.  I could see them try this; I don't think that the reaction will be what they think it will be.

The problem is that the only people who will trust them to "fix" their problem are the ones who already trust them.  That is a continually shrinking portion of the public despite the increasingly shrill social shaming that they are doing.  They are not convincing anyone and indeed are doing the opposite:

My liberal friends (and yes, I do have a few still, though most tossed me under the bus as soon as there was any societal pressure to do so) will constantly chide me about my words, or my attitude, and go tsk tsk, how rude! But then when people on their side go bat shit fucking insane, they sit there meekly and stand for nothing, because they know the beast they fed will just as easily turn and eat them too.

Besides, as soon as a democrat stands for principle outside of the narrative, they get tossed. Pick any of them in media, punditry, or academia. Any at all. Glenn Greenwald. Tim Pool. Jordan Peterson. Those were all mushy moderates, until they say hey wait, the left is going nuts, and boom, now the left thinks they are the second coming of Satan-Hitler. The party is currently enraged at Sinema and Manchin.

And I’m not alone in this. Most politically alert non-leftists will tell you the same thing. You belong to a cult which will not abide heresy. You want to show us that you aren’t all authoritarian statist trash, DO SOMETHING.

J.Kb has an outstanding example of their closed - and clueless - world view.  This is the Elite that will solve the Republic's problems?  As John Michael Greer points out, Tomorrowland has fallen.

This so-called "elite" knows nothing of history.  Basically every revolution in history was started by a starving underclass.  While I think that Peter is right that they could very well pitch this country into that sinkhole, they do not seem to realize that each of these revolutions was against the Powers That Be who were running things.  Just how they will harness all this underclass rage against The Man when they're him is beyond me.

They're desperate, and they're out of gas, and it sure doesn't look like their scheme to start revolution in the streets can do anything other than build their own funeral pyre, the Sardanapalus option:

“The Death of Sardanapalus” by Eugène Delacroix depicts the tale of Sardanapalus, a king of Assyria, who, according to an ancient story, exceeded all previous rulers in sloth and decadence.

He spent his whole life in self-indulgence, and when he wrote his epitaph, he stated that physical gratification is the only purpose of life.

His debauchery caused dissatisfaction within the Assyrian empire, allowing conspiracies against him to develop. Sardanapalus failed to defeat the rebels, and then enemies of the empire join the battle against him.

After Sardanapalus’ last defenses collapsed and to avoid falling into the hands of his enemies, Sardanapalus ordered an enormous funeral pyre.

On the funeral pyre were piled all his gold and valuables. He also ordered that his eunuchs and concubines be added to the fire, to burn them and himself to death. 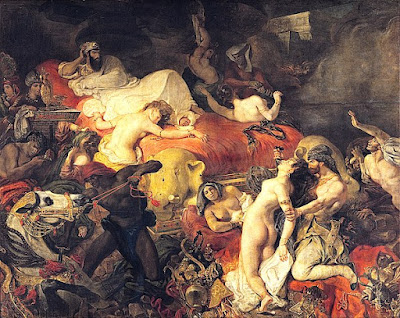 Nobody did romantic doomed fate better than Byron and Delacroix.  Alas, I feat that Hollywood will not be up to this level of artistic achievement for what the "elites" are bringing down on their own heads.

Borepatch - My name for the Managerial Class is "Our Political And Social Betters (OPASB), but the concept is the same: a group that believes itself by dint of education at all the right places and employment at all the offices, that they are "qualified" to lead us poor schleps.

Some good thinking there. I think that the author is right: things are moving to a head and the longer this goes on, the more obvious it gets that this is about nothing but a raw power grab.

Basically every revolution in history was started by a starving underclass

Yes and no. There was usually an educated, more or less middle class leader or several, who picked up on the anger of the underclass and organised it. Oliver Cromwell was a related to Henry VIII's First Minister. Robespierre was a lawyer; so were Lenin and Gandhi. Hitler was the son of a civil servant. Mao came from a peasant family, true; nominally so did Trotsky, but his was the sort of peasant family that could afford to send him away to boarding school. Nelson Mandela's great grandfather was King of the Thembu people.

Look out for a motivated, young to middle aged, demagogue, perhaps a lawyer with a reputation for fiery summings-up to the jury and probably with a troubled past of politically related activities.

Barbarus pretty much nails it, although the contention that basically every revolution in history was started by a starving underclass is probably wrong.

Look deeper and you find a fed-up middle class (boy, have we got that now). The stolen election was a last gasp (and a clumsy one, at that) to stem the tide.

Look for a lot of restiveness come the warm weather.

Good points all. And they 'want' to rewrite history so they can point to how right they were and are... Problem is we're not buying it.

They think they have enough money and power to convince, coerce, enslave, imprison or kill EVERYBODY they want to. 90% kill, die-off preferred. You guys are in the wrong rabbit hole.

Our problem is we don’t have a ruling class. We have absolute cretins in the role. Morons. Justin Trudeau, Joe Biden, Nancy Pelosi, their endless entourages of fart catchers… these people are truly clowns. They have to go.

Fortunately most Americans are armed and this may actually make for a more reasonable transition back to sanity. We’ll see I suppose.

I'm chiming in on the middle class revolutionaries. Castro was a lawyer. Guevara and Habash were doctors. Arafat was an engineer. Ho Chi Mihn was a teacher and Giap was a school administrator. Stalin was in training to be a priest.

On the funeral pyre were piled all his gold and valuables. He also ordered that his eunuchs and concubines be added to the fire, to burn them and himself to death.

This is the Left's plan for us. If they can't rule, let the world end.

I've also seen the argument, although I cannot recall exactly where, that the issue is that modern elites don't want to be elite, because then they'd be responsible for things; so the next general of managerial elite spend all their time complaining about things, and none of them want to step up and do anything, since then everybody would be complaining about them.