History repeats itself: the first time as tragedy, the second as farce.

The airwaves are filled with huffing and puffing about an "insurrection" a year ago.  Ignore that literally none of the hundreds of those arrested and held without bail have been charged with actual insurrection - this is political theater.  It's political theater that the Democrats and the media (but I repeat myself) think will help them win a great political victory.  As political theater, the facts are entirely beside the point - what's important is the drama that can be stirred up.

Alas for them, it's a wet firecracker.  In our divided Republic, nobody remains unconvinced (either pro or con), and this will not move that needle.  And in any case, the "drama" (such as it is) is underwhelming.  You want drama?  Look at the Catiline Conspiracy in the death throes of the Roman Republic.  That comes down to us via Cicero, so it's top shelf drama.

Catiline was a Roman Senator, bitter that he lost his bid to be elected Consul (kind of sort of President).  He was said to have organized a band of ne'er-do-wells to overthrow the Senate and take power for himself.  Cicero gave a famous address to the Senate laying out his plan, and as he spoke the Senators one by one got up and moved away from Catiline, who came to a bad end. 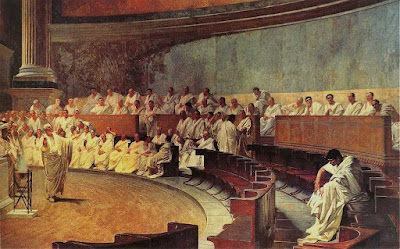 Now that's drama.  Unfortunately, the drama of the story has overpowered the actual facts of the matter.  We only have Cicero and Sallust as sources and both of them are highly biased against Catiline.  There's a very good chance indeed that Catiline was railroaded by the finest orator of his day, and smeared for the last 2000 years by a biased media.

Does that remind you of anything?

And so today is rather a bore.  The story is certainly hyped, very likely manufactured (hello, FBI!), and the "drama" pales in comparison to not just what we've seen before, but what we've seen 2000 years ago.  I hate to break it to the media, but they're no Ciceros.  Or even Sallusts.

An “nsurrection” by definition is the act or an instance of revolting, especially violently, against civil or political authority or against an established government.

The Trump supporting mob who violently attacked and damaged the Capitol did so in an effort to prevent our legitimate electoral process from honoring the will of the voters in seating a duly elected President.

The world witnessed this live.

Trump’s side lost fair and square. I realize many are in denial of that but the mob wasn’t above the law and they cannot reject our Constitutional and legal process of determining that simply because they didn’t like the legally declared outcome of the election.

And accordingly, the mob is in the process of filling up jail cells, just as they should be.

Wouldn't trials be needed before "filling up jail cells"?

Trump’s side lost fair and square.

Handwaving won't make this go away. Neither will putting your fingers in your ears and singing "La La La!"

You also wrote An “nsurrection” [sic] by definition is the act or an instance of revolting, especially violently, against civil or political authority or against an established government.

So riddle me this, Let's Go Brandon Man: why have NONE of these people been charged with insurrection?

Was it a riot? Maybe. Charge them with rioting then. But you make yourself look ridiculous when you call it an "insurrection". If they were going to overthrow the government then why did they leave their guns at home?

Cosda, remember the Red Queen from Alice In Wonderland: First the sentence, then the trial.

I heard Ted Cruz threw them all under the bus?

What a gutless piece of shite.

Glen, it seems that he's going to run for President again. Good luck to him after all that.

Oh yeah, Cruz and Pence. What a pair!

Legal means many things, and can lead to legally owning things that were stolen in the past. In these situations, the stolen goods are returned to the rightful owner, and those that were involved with illegal activities are prosecuted for their crimes.

Those arrested in the Capitol have been charged with crimes that usually mean a small fine. Some have been in solitary for long periods of time, and if someone as thick as you Ron pull your head out of your butt, you'll know that if this is the way things will be run, the next administration, which will not be Democrats, will be brutal to those like you, and rightfully so.

Processes and rules were changed outside of the required legal means due to the COVID pandemic. This means that those changes were not legal. Emergency powers and court rulings allowed untested and less secure voting methods to be used. This is factual and beyond reasonable dispute.

Saw Cruz's comments. He's dead to me.
But, he gets the Sen. John McQuisling Prize for 2022.

Ronald, in his delusion, has yet to explain how an unarmed mob was "revolting" against armed Capitol police officers.
Was it a Jedi mind trick?

Don't be so hasty giving out the Quisling prize yet. 2022 has a long way to go. Devin Nunes replacement as ranking minority member (and potential chairman) on House Intelligence Committee is a neocon who wants to "work across the aisle". I agree that Cruz gets to be a finalist though.

Cruz may be imitated, but he'll never be surpassed.