John Williams - Hymn for the Fallen 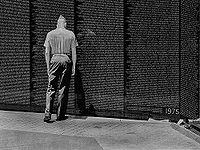 Tomorrow is Memorial Day, a day for reflection on those who gave everything they had and everything they would ever be for something larger than them.  That something is us, and the world is filled with the graves of the fallen, and will likely see new ones until the World is remade.
A lot of people seem to think that Memorial Day is "thank a veteran" Day.  I guess that could work, but only if you were at a cemetery.  The roots of Memorial Day go deep, all the way back to the American War of Southern Independence*, where "Decoration Day" was reserved to take flowers to the graves of the Fallen.  Late May was chosen because flowers would be in bloom in every corner of the Republic.Nowadays it's the long weekend that starts the summer season.  Trips to the lake, grilling out, and cold beer push the original meaning aside.  Few take flowers to the graves anymore, which is a damn shame.  The Fallen deserve a day of remembrance.

This weekend, we are called to reflect on these fallen.  Art at its best is there to help lead the way.  Classical music used to offer many selections for solemn days like this before it was degraded like all modern art.  Fortunately, Classical music has found a niche where it yet thrives, with talented composers writing new music for the cinema.  Perhaps the greatest of these in our age is John Williams.  He wrote this for the film Saving Private Ryan, where it played during the final credits.  This is a tour of those graves.  Sadly, many Americans have not been to any of these places.

The Fallen remain forever 20 years old.  Remember them tomorrow as you fire up your grill.  I don't think they - or the boys from Gettysburg or Fredericksburg or Cold Harbor or Pearl Harbor or Normandy or a thousand other hallowed grounds -  would begrudge you your family enjoyment.  But remember them.
That's what Memorial Day is about.

* It is vulgarly called the "Civil War".  It wasn't.  The South didn't want to take over the North, it wanted to leave it.

Grew up on military bases, one which was taken from the Japanese during WWII.

Walked on hallowed decking of the USS Arizona Memorial, and heard the voices whispering.

Been to battle fields and burial grounds, more hallowed and haunted places.

You can hear the voices whispering, "Don't forget..."

Fortunately I have not been closely touched by the death of a soldier, though I did know one, who went on to receive posthumously the Medal of Honor, SFC Paul Smith.

I have been touched more by those horribly scarred mentally by war, those whose bodies survived but, in a lot of ways, their minds didn't.

All around me in this great nation (held under duress by a false government) are fellow citizens and lucky foreigners that have our soldiers to thank for their existence. There are whole countries that would not exist if not for our soldiers.

So tomorrow is a day not of barbeque or partying, but of solemn remembrance and prayers for the return of sanity to this wonderful land.

John Williams is a genius. What a powerful piece.

Powerful is right... Thank you for remembering!

Thank you Borepatch. Some of the European cemeteries look amazing. Sadly, i have only been to USS Arizona and Arlington/Tomb of the Unknown Soldier/ Vietnam Wall.

Every American and every one in France should visit the American cemetery in Normandy. I will go again when travel is not the colossal pain it is now.

Libertyman, yes - everyone should go there. It is quite humbling.

That was well said.

"The South didn't want to take over the North, it wanted to leave it."

True as far as it goes, but they actually did worse. They wanted to bust up the Union because they were pissed off that a *legal* presidential election didn't go their way. And through that precedent they tried to turn us all into South America, or Africa, or Yugoslavia. And all because their leadership class didn't want to pick their own damn tobacco or cotton. And they would have likely gotten away with it if their hubristic hot-heads hadn't initiated the violence.

Oh well. Flame away if you must, but I am a southerner whose great, great grandfather fought with the 15th Kentucky infantry - UNION! And though I wish the war had never happened, I am glad that the Confederacy LOST!