As I look ahead, I am filled with foreboding; like the Roman, I seem to see "the River Tiber foaming with much blood."
- Enoch Powell MP, quoting Virgil in "The Rivers of Blood" speech

Enoch Powell was one of the first politicians to be de-platformed.  As with most of these sorts of innovations, this happened in the Old World in the 1960s.  I posted about this seven years ago, although Google can no longer find this; DuckDuckGo can, though (and that tells you everything you need to know about search engines):

45 years ago last month, British MP Enoch Powell gave a stunning speech.  In it, he looked on the immigration of foreign peoples into the Kingdom and the way that this was changing the UK's culture.  It was widely criticized by all Right Thinking People® but at the same time was wildly popular with working class Britons.  Indeed, a thousand dockworkers marched on Parliament in protest when Powell was sacked from his positions of leadership.Dockworkers marching in support of a Tory politician.The most famous line in his speech is where he quoted Virgil:

As I look ahead, I am filled with foreboding. Like the Roman, I seem to see 'the River Tiber foaming with much blood'.

He was roundly damned for his "inflammatory" and "racist" remarks.  And so the British Political Class went back to sleep - indeed, the last Labour government intentionally accelerated immigration to make the UK "less British".

Today we saw the occupation of the Capitol building by people "annoyed" by what they (and many others) see as the theft of a Presidential election.  The protesters chased off first the Capitol Hill police and then the Congress itself.  It looks like one women lost her life, shot by a cop.  We'll have to see - early news is notoriously unreliable.
But looking at this, I thought of Virgil.  He of course, did not make up the Aeneid out of whole cloth; Virgil wrote propaganda for the first Roman Emperor, Augustus.  The Aeneid was propaganda, but what propaganda.  It made Caesar Augustus' family history into legend.  Because it was propaganda, it was exaggeration, but it was useful exaggeration to Augustus who while not related to the Great Leaders of the previous century was able to deftly exploit those leaders' exploits to his own advantage.
The most important leader at the beginning of the end of the Roman Republic was Tiberius Sempronius Gracchus,  He was the guy who noticed that while the Roman Republic had swept all foreign enemies before it, the working class had suffered despite the great riches of empire.  Tiberius Gracchus decided to run for public office despite his great family wealth, and to put forth his formidable political skills to benefit the Roman Working Joe.  He failed, because the Roman political establishment buried their traditional political differences in the face of Gracchus' challenge, and in fact had him killed. 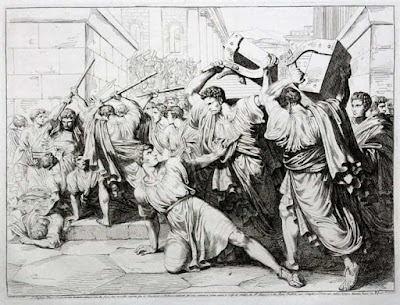 In short, the Roman Deep State closed ranks to block needed reform.  It was the beginning of the end of the Roman Republic as long cherished political norms (Mos Maiorum) were cast aside.  And so two generations of the Roman political elite were exterminated in a civil war so profound that what was left of the exhausted Republican Elite welcomed the first Imperator with open arms because he ended the civil wars.
Throughout this whole period in Roman History, the Law was supreme.  Of course, the Law bent to the prevailing political winds.  As the Roman said, "The Law is harsh, but it is the Law".  Dura Lex, sed Lex.
Donald Trump is the Tiberius Gracchus of our day.  He is the guy who noticed that while the American Republic had swept all foreign enemies before it, the working class had suffered despite the great riches of empire.  Donald Trump decided to run for public office despite his great family wealth, and to put forth his formidable political skills to benefit the American Working Joe.  He failed, because the American political establishment buried their traditional political differences in the face of Trump's challenge, and in fact had him [well, we'll have to see if they let him live free, or jail him, or kill him].
But Tiberius Gracchus had many supporters, who didn't let the Roman political elite rest easy.  Likewise with Donald Trump, as we saw today: 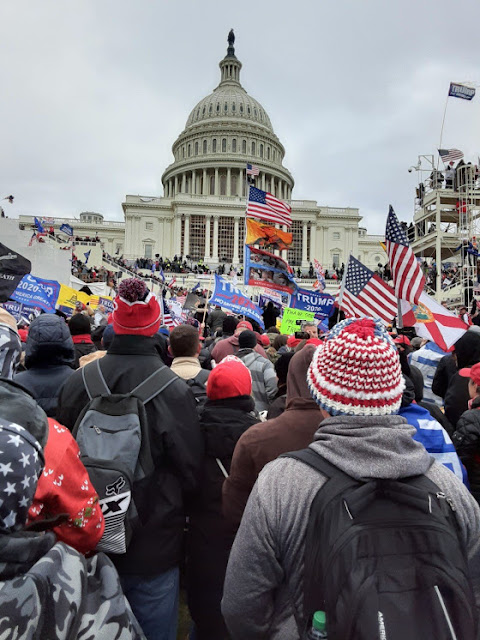 Some of Gracchus' supporters were killed, as we saw today.  Looking forward, I am filled with foreboding.  Like the Roman, I seem to see the river Potomac foaming with much blood.  We're already started, it seems.  The only questions really remaining is who is to play the part of Augustus Caesar, and how many of the elite families (and, it must be said, other families) must die before a grateful Republic reaches for their savior Emperor?
But the Founding Fathers knew about the failings of the Roman Republic.  They strived to avoid them in their Republic.  As a student of history I must say that they avoided the Roman pitfalls for 200 years.  Not bad at all.
Never mind that the Romans avoided these for almost 500 years.  God Save this Honorable Republic.
Posted by Borepatch

As Mark Twain said, "history may not repeat but it often rhymes". Glad my parents and in-laws are no longer alive to see this shit show. Yes who will be the emperor for my children and grand children. I am thankful for the hard men who created good times.

Before we get to Augustus we have to get through Sulla and Marius and Caesar and 3? civil wars a major slave revolt and lots of assassinations. Not looking forward to that but at my age, I won't be around to see the end of it.

The Roman Republic outgrew its governing institutions and was not able to cope with the size of the enterprise. It was a large multi-ethnic entity with more divisions than just the class issues highlighted by the Graccis. We are more or less in the same place and will go down the same road. The only real solution is devolution.

Is DuckDuckGo actually getting good as a search engine?

There are some parallels but we are treading new ground, BP. Consider: historically the middle class has never been as well armed as the American citizenry is today. Any one of our politicos are only one caress of the trigger away from retirement. As for Virgil and his propaganda... today CNN is farting into the wind. I’m a retired old fart, with the time to suss the ins and outs of Alt Tech. Donald Trump’s message will be heard whether the swamp likes it or not. His Twitter account may be suspended, but he’s being quoted all over Gab and his vids run everywhere. I saw that woman bleeding out almost as it happened. The Swamp can no longer operate under the cover of darkness. This is a development never seen before in history. I roared with laughter as the fags at CNN clutched their pearls and gobbled in fright. If you’re on Alt Tech, you will see the Tyrone’s and the Laquisha’s stuffing the ballot boxes and indulging in shenanigans on video tape. You will hear the eye witnesses, hear the audio tapes, and see the signed affidavits that are not permitted in the mainstream media. Every citizen of the USA and Canada needs to embrace Alt Tech and learn how to use it. Yes, it’s chock full of lunatics (like yours truly) - but you can filter the loons out. Then you are left with the men and women that tell their story there, because the gate keepers won’t let it be told anywhere else.

The truth is this: Donald Trump has a valid legal case, as do the Donks. If the Supreme Court was a court and not a grift - they’d have taken the case and ruled on it. The truth is that America has contradictory election laws. This has happened two or three times in American history already. The reason it keeps happening is that the law makers are too conflicted and too stupid to resolve it. That is what needs to be done here, and it’s the proper way to address it. That is the legal world where everyone is reasonable and looking for an equitable resolution.

Out here in the real world... the establishment is making its play, and they’re attacking from the left. I am convinced that America has a power vacuum. The establishment consists of cowards, traitors, and degenerates that are so weak, they can’t even defend their own palace. Something is going to fill that vacuum. I see either a Stalin, a Pinochet or a Duterte in the offing. Power vacuums typically don’t last long.

T-Bolt, it's my default search engine. I hardly ever use Google anymore and never for anything controversial. It's like Wikipedia that way.

Glen, I hope it doesn't come to shooting but it feels very like how January 1861 must have been. Lots of folks are spoiling to put down the other side.

When protests are meaningless (always have been) and now voting is meaningless, what is left?
imo, divorce (secession of enough states) or armed revolution (not gonna happen)

I've been reading some Livy lately. It's very cyclical in the very early days of the Republic.

(1)Rome is at war with the Veientes and wins!

Rome is at war with the Etruscans and wins!

Rome is at war with the Volscians and wins!

I think all of history is comprised of elites using/abusing/oppressing the plebes and distracting them with war. Bill Clinton knew that play.

BTW - I am definitely not a Marxist, but the more I read history, the more I do think there's a pretty constant theme of some sort of class struggle. Jefferson saw that with the farmers and the industrial types.

Too bad we can't reset the federal government to 1789 so we could have another 200 year.

Weetabix, why not? That is my ferverent hope, that we will revert everything back to a 1789 understanding, and nix the massive overreach. The Constitution is almost inspired... Why not roll back the mess and start with a few new ammendments.... term limits for every one in government service.... EVERYONE. And every few years, all laws expire after an audit by a citizen task force to see impact. I hope and pray, but am expecting the worst...

It shows up on my Google search. And yes, I use DuckDuckGo as my default. Any others I use in incognito mode, mostly so I don't see ads for anything I search for show up in my email feed and on every website I visit.