The Barbarian hopes — and that is the mark of him, that he can have his cake and eat it too.He will consume what civilization has slowly produced after generations of selection and effort, but he will not be at pains to replace such goods, nor indeed has he a comprehension of the virtue that has brought them into being. Discipline seems to him irrational, on which account he is ever marveling that civilization, should have offended him with priests and soldiers.... In a word, the Barbarian is discoverable everywhere in this, that he cannot make: that he can befog and destroy but that he cannot sustain; and of every Barbarian in the decline or peril of every civilization exactly that has been true.

We sit by and watch the barbarian. We tolerate him in the long stretches of peace, we are not afraid. We are tickled by his irreverence; his comic inversion of our old certitudes and our fixed creed refreshes us; we laugh. But as we laugh we are watched by large and awful faces from beyond, and on these faces there are no smiles.
- Hilaire Belloc 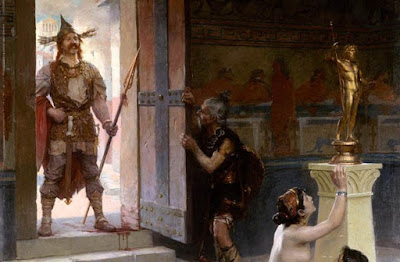 It's such a relief that we have the fiercely conservative Republican Party manning the battlements.
Posted by Borepatch

Labels: America, Deep Thinking, Rome, us vs. them

It's even worse up here in Canada.

Yep, all we can do right now.

“Whatever happens, we have got
The Maxim gun, and they have not.”

I think that the GOP establishment is going to have a rude awakening in the next election.