Quote of the Day, Iconoclast edition

The Czar of Muscovy points out something that I think is almost certainly true:
The word iconoclast is very old, dating back to late antiquity and the eastern portion of the Roman Empire.  It didn't fall in 476 when the last western Emperor was deposed, but remained a going concern for another 1,000 years.  Sure, it was Greek speaking, and Christian (rather than worshiping the old pagan pantheon), but it was Roman in institution and law and they thought of themselves as Roman.
But when Islam united the desert Arabs in the 640s AD, the Romans came within a hair's breadth of losing everything.  Remember, they had been the biggest kids on the block for over 800 years, and then within 10 years or so had lost the richest 75% of their remaining empire to what they could only look at as desert barbarians.  How did this happen?
Their answer was the God Almighty had removed His favor from the Empire due to their sins.  Looking around for a handy sin, they landed on the icons.  Here's an example of one: 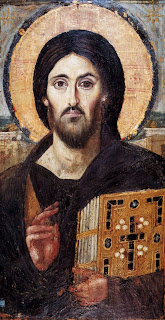 This is the oldest surviving icon of Christ Pantokrator (almighty) from St. Catherine's Monastery in Sinai.  It dates to the 500s AD, and is only the best known example of widespread icons popularizing christian saints and parables.  To most of us in the west, it's entirely unremarkable (albeit a little exotic).  Here's a western equivalent: 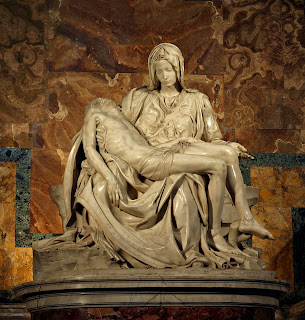 This is Michelangelo's Pieta, in St. Peter's cathedral in Rome.  The only other renaissance art work that comes close in importance (or fame) is Michelangelo's Sistine Chapel.  Like I said, this sort of thing is to be seen in nearly every church in the world.
But the ancient Romans, looking around for a handy sin to blame, decided this was idolatry.  You see, they said that people were worshiping these "graven images" in violation of the 4th Commandment.  And so Emperor Leo III more or less outlawed them around 730 AD.
Of course, it wasn't about the Commandment.  That was just the excuse - the Romans were looking for a reason why the Lord had removed His favor from the Empire.  Identifying the statues (and icons) as "The Problem" allowed the Emperor to see who would line up on his side and who would not.  Those who lined up were rewarded; those who didn't were punished.  Bishop Euthymius of Sardis refused to line up and was whipped to death at Christmas of 826 AD on the orders of Emperor Michael II.
And so back to the Czar of Muscovy's comment: Today, the liberal rioters are trying to erase their party’s involvement with racism by eliminating all the Democrats who supported it.  Those statues are Graven Images and an offense to the eye.  How else to explain the pulling down of the statues of Frederick Douglas or Abraham Lincoln?  Because they were Republicans, and their opponents - the supporters of slavery - were Democrats.
Remember, the Romans were looking for an explanation for how they had lost 90% of their empire (first the western half to German barbarians, then 75% of what was left to the Arabs).  People had a gut feel that something had gone terribly wrong, and what used to be a powerhouse was now only hanging on by the skin of its teeth.
Today's Democrats are in the same position, looking for an explanation for how they lost Congress (other than a couple of brief restorations in 2006-2010 and again in 2018).  From 1930 on, they mostly owned the Capitol building.  They also lost the White House, and things look like a Republican landslide is a'comin' in November.  The Democrats have gone - like the Romans of old - from being the biggest Badasses around to being the whipping boy of Donald Trump, George W Bush, Newt Gingrich, and Ronald Reagan.  That's decades of losses - and like the old Roman provinces of Syria and Egypt - the losses include States that were the most productive and useful to the Party.  I mean, Wisconsin voting Republican?  WTF?  Obama was supposed to have turned all this around and established a generation of Democratic rule, but instead the Democratic Party has been decimated across the nation.
And so something has to go - not to explain how this all happened, but to show who's on The Team and who's not.  Line up, get with the program, or pay.
Of course, it didn't help the Romans get their provinces back, and pulling down statues of Ulysses Grant won't help the Democrats keep Minnesota from voting Republican.  On the contrary.  But nobody ever said that Man was a rational animal.  Man is a rationalizing animal coming up with "Just So" stories to explain the Voice of the Thunder or the loss of union votes.  But as Milton wrote, some would rather rule in Hell than serve in Heaven.
The Re-Elect Donald Trump 2020 campaign looks on at the modern iconoclasts, and thanks them for their support.
Posted by Borepatch

I'm confused. Was the elk a Democrat?

Indeed. I think you give these guys way too much credit, BP. C’mon... an Elk statue? What’s the other momoment they got...the one for the 43rd Massachusetts or whatever it was, that were all black? These guys aren’t capable of that level of cognition.

We must take care not rationalize ourselves. The old adage applies: give a white man a pile of bricks, and he will build a house. Give a black man a house, and he’ll give you a pile of bricks. Hey - I don’t like this either but the pattern is always the same, and it always repeats. Baltimore, Detroit, and now Chicago are what they are.

With peaceful segregation now off the board, the White Man has the same nasty questions facing him that the first civil war was meant to address. Whaddya do with these people? The average black IQ is 85. Mohammed Ali had an IQ of 79 which is mild mental retardation in whites. 40% of black people are too stupid to hold a mundane job. This isn’t racism, it’s a matter of public record.

This is only going to get worse until it is reckoned with.