ASM826 has been posting about the fate of old ships, which reminded me of one of the most famous nautical portraits of all time. 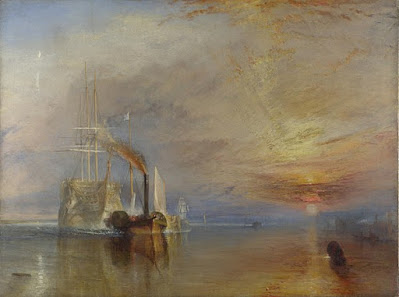 It's "The Fighting Temeraire". painted in 1839 by J M W Turner.  You can see it in London at the National Gallery.  The complete title gives a better sense of what's going on: The Fighting Temeraire, tugged to her last berth to be broken up, 1838.  It was the last voyage of a renowned ship,
She came by her fame honestly.  She was in line of battle immediately behind Admiral Nelson's flagship HMS Victory at Trafalgar, and saved the day when Victory was in hard fighting.  She not only saved the flagship but captured two french ships as well.
But time and tide wait for no man, and for no ship.  A 98 gun ship of the line was not only expensive (it took a small forest of oak to build her) but the advent of steam power made her obsolete.  Wikipedia tells the sad tale of her fate:

Temeraire was hauled up onto the mud, where she lay as she was slowly broken up.[62] The final voyage was announced in a number of papers, and thousands of spectators came to see her towed up the Thames or laid up at Beatson's yard.[72] The shipbreakers undertook a thorough dismantling, removing all the copper sheathing, rudder pintles and gudgeons, copper bolts, nails and other fastenings to be sold back to the Admiralty. The timber was mostly sold to house builders and shipyard owners, though some was retained for working into specialist commemorative furniture.[62]

A lot of famous furniture seemingly was made from her.
The painting also has an interesting history.  It made Turner famous.  It was also the favorite of all his many paintings (at least one of which has graced the pages of this blog).  He only loaned it once, and regretted it.  He refused to sell it, and on his death bequeathed it to the Realm.  If you find yourself in London, you can see his painting in the National Gallery and his grave in St. Paul's, and muse on how tempus fugits.
Posted by Borepatch

It always makes me wonder when I watch Master and Commander that men of that ship effectively moved from sails to steamships within the course of their service. I cannot even fathom that level of change.

I would have loved to have some of that oak. We are never to see its like again.