So Robert Mueller had a press conference

It really won't make any difference.

Sure, it will play great for the Beltway Chattering Classes, but they've lost the ability to move the meter of public opinion.  Sure, it will play well with the hard core Democrats and die hard anti-Trumpers, but they won't feel differently about the situation than they did before his presser.   It also won't change any minds among the hard core Trump base.  They stuck with him through a myriad of "scandals" and "gaffes" and so no minds are getting changed here.

Next year is about the people in the middle - blue collar Democrats, suburban Republicans, soccer Moms, Independents.  This group seems to have decided one big thing about all this Russia Investigation brouhaha, and that is that there is something fishy about the FBI.  Something like two thirds of the American public wants the FBI investigated here.  That's up from around half the public a year ago.

All Mueller really has to go on is "Mr. Clean", and his Agency seems to be (at least questionably) dirty. And so yesterday's huffing and puffing was, in the Bard's immortal words, a tale told by a fool, filled with sound and fury but signifying nothing.

And the poll from a year ago is a very interesting one.  People also want an investigation into how the FBI ran the Hillary Email Server investigation.  A picture tells a thousand words on this: 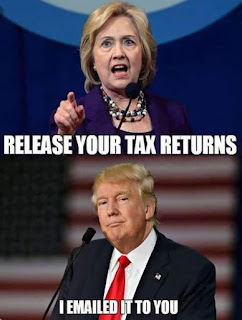 I'm actually kind of surprised how this is all playing out.  $40M and reading through maybe a million pages of subpoenad Trump documents and there's literally nothing.  Trump is either the cleanest President of my lifetime, or he's perhaps the smartest.
Posted by Borepatch

Concur with all. Sigh...

He's been under an intense spotlight since the late 70's and the worse that anyone has found was he cheated on his wives. But all the divorces were handled well, all the exes ended up very rich, and even they really have nothing bad to say about him.

He is the most investigated person in politics today. If only a 10th of the focus was shined on, and subsequently reported on, most politicians and any of the current crop of Dem(on) candidates, said targets would wither like an ant under a magnifying glass on a clear hot summer day.

And, yes, he's wicked smart. Has to be to be able to find such smart people to surround himself and keep them loyal. That't the thing, really. Until recently, all of his senior people have been fiercely loyal, and overall his regular workers. Only since hiring political staff has he had a problem with leakers and backbiters. Which says something about the political world - Politicians just can't keep their fat traps shut, even with a signed NDA, and if they don't have anything to say, they'll make up something or stir some stuff up in order to have something to say.

At this point in the previous administration, there had already been at least 3 major scandals including the previous chief administrator sticking his nose into a police investigation and practically causing a race riot over it (and then further compounding the problem by 'asking' the police officer involved to come to the White House for a 'discussion.' Yeah, right.)

Smart, clean, thoughtful, Christian, loyal to those deserving it, and a clean fighter (he doesn't make comments that aren't true. And he has the research staff and money to find out all the secrets and issues.)

Even his kids are cleaner than most politicians' kids. So one son divorced his wife. But none of his children have been found with drug paraphernalia, or caught smoking pot, or engaged in mass date-rape scenes (like the Kennedys...) And all of his kids have had to work for their money (unlike... (cough) Chelsea (cough, cough...))

I'm not the least bit interested in, say, Trump's tax returns. What I'd really like to see are the tax returns of congress weasels who came to office poor but left rich. People like Harry Reid, Pelosi and her husband (rumors abound about how profitable his company has been since she's been in office). Justin Amash, for instance, the only republican who wants to impeach Trump. Who, coincidentally is said to have business interests in China that are threatened by recent tariff action.

Those are the investigations I'd like to see. But that's just me.

What we see in all this: AG Barr will go toe-to-toe with an assortment of FBI types. Some will resign (at great expense to taxpayers, who will fund their retirements,) some will be indicted, few will do any actual time.

And the clock ticks.

House Dems will push and push for impeachment. There will be hours upon painfully endless hours of pompous bluster from one political hack after another. Nothing will be accomplished. Impeachment dies in the Republican Senate.

And the clock continues to tick.

November, 2020, is approaching. Poll after mindless, meaningless, boring, poll will try to tell us who leads, who loses, who we'll vote for. when the election smoke clears, some incumbents will win or lose, some "newbies" will step up and take their oaths. Bet the farm that there will be even more election drama than there was in 2018, because there will.

On November 2nd, 2020, all these politicians will get in front of countless cameras and microphones and tell you why you should vote for them. They've accomplished so much: Election reform, border security, improved medical insurance, control of Big Pharma, infrastructure funding, opioid control, student loan reform, fixed the V.A. and Social Security.

The list is as painful as it is nearly endless, because they (so far,) have accomplished none of these things!

On November 4th, 2020, find yourself a quiet place, pour yourself a glass of fine, aged whisky, and contemplate the accomplishments of the 116th Congress. At least you'll enjoy the whisky.

A lot of people would love to see them Bill. And that is how utterly dense the Democrats are. They live in glass houses and throw stones and then are shocked and dismayed when those exat same stones come flying back.