The key to the Bastille

It doesn't hang in the Bastille, which was torn down by a Parisian mob in 1789.  It hangs today in Mount Vernon, a gift from the Marquis de Lafayette to his friend and mentor, George Washington.  Washington stood against tyranny, as did Lafayette.

Yesterday, a Federal Judge dismissed charges against Cliven Bundy, "with prejudice" - meaning that the Department of Justice cannot refile the charges.  It seems that the prosecutors in the case hid evidence of governmental wrongdoing from Bundy's lawyers.

In a word, tyranny.  And to the Court's credit, tyranny that the Court ruled will not stand.  Perhaps there is hope for this Republic yet.  As Adam Smith wrote, there's a lot of ruin in a country.

Here is the story of the tyranny, from a post four years ago.  The wheels of Justice grind slowly.


The Bureau of Land Management's Bastille

July 1789 was a tumultuous time in Paris.  Discontent with the Royal regime had been building for decades and had reached the point where the King was forced to call a Constitutional Assembly.  But as the nobles, clergy, and bourgeoisie harangued each other, the people of Paris were growing increasingly restive.

And by "restive" I mean that mobs were spontaneously forming.  The most important of these was the mob that stormed and sacked the notorious Bastille prison on July 14.  The Bastille had an evil reputation and was seen by essentially everyone - educated and uneducated alike - as a symbol of a despotic and tyrannical government.  And so the mob broke the doors down and sacked it.  They paraded the head of its commander on a pike through the streets.

What is odd is that the perception was very different from the reality.  The Bastille had almost no prisoners housed in it.  Conditions for the prisoners were actually fairly comfortable, and fine dining among its noble prisoners (most of those incarcerated there) was the norm.  But the air was filled with discontent, and so wildly exaggerated books like Simon-Nicholas Linguet's Memories of the Bastille painted a lurid (if untrue) portrait of the place.  And so it was torn down.  Today's Place de la Concorde is all that remains of the site.

We have just see the US Government's Bureau of Land Management go through an experience similar to Louis XVI.  What was essentially a mob driven by a long-building sense of grievance stared down the King's Men in Nevada. 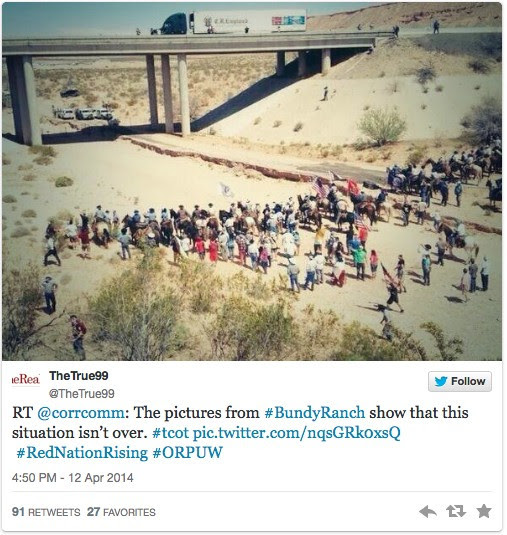 A number of people have rightly pointed out that Mr. Bundy is no Saint, and that legally he doesn't have a leg to stand on.  That's quite true.  It also isn't the point that is driving events.

What is driving events is something that would have been well understood by M. Linguet.  Mobs do not spontaneously form out of nothing, and the spark that lights the fire may have very little to do with reality.  His memoir was essentially a work of fiction; it was enormously influential nonetheless because the Government then had laid the groundwork building widespread resentment.

As has ours in this day.

All that remains of the Bastille is the key to its main gates, currently hanging on display at Mt. Vernon (it was a gift to George Washington from the Marquis de Lafayette).  That's all that's left of a feared symbol of Royal power - that and an annual national holiday in France.

Our Government has no idea what they have awakened, any more than Louis XVI had.  So far, it has played out without blood flowing in the streets.  I am pessimistic that this will continue for long.
Posted by Borepatch

"Yesterday, a Federal Judge dismissed charges against Cliven Bundy, "with prejudice" - meaning that the Department of Justice cannot refile the charges. "

It's a good thing, too, because it looked like "Justice" was, in fact, planning on refiling the charges.

"...Perhaps there is hope for this Republic yet."

Let me know when they start punishing government actors for the multitude of crimes they're committing.

Thanks! For more information about intriguing details of the French Revolution, the Storming of the Bastille, and the Bastille key that Lafayette gave to Washington, check out the book "George Washington's Liberty Key" and www.LibertyKey.US