I'm updating my prediction for this year's election.  Here are my assumptions that drive the outcome:

1. The polls do not accurately reflect the state of the electorate.  There is a persistent over-sampling of Democrats as pollsters base their turnout projections on the turnout rates in the 2008 election cycle.  The, Democrats were massively energized and Republicans were somewhat demoralized, and so the cycle was something like D+5 or even more.  There's simply no way that we'll see that this year, even with what we can expect to be pretty serious voter fraud.

2. There is a real Bradley Effect in play here.  The Bradley Effect is almost always misinterpreted to mean that voters are racist; instead, it shows that voters (rationally) do not want to be accused of racism, and so lie to the pollsters.  This inflates Obama's numbers by a couple of points over what we will see in the ballot boxes where the secret ballot will allow people to cast their vote without being accused of being a racist.  Given the exceptional nastiness of this campaign - the "dog whistle" accusations of the last day are a good example - this reluctance to tell people their real opinion is entirely justified.

3. Perhaps 10% of the voting population has yet to make up their minds, and will not until a couple weeks before election day.  These people are simply not political junkies, and while they take their votes seriously, they just aren't particularly interested in tuning in to the give and take until the big day approaches.  Given that the economy is on the skids and people rationally vote their pocketbooks, this group will likely break to Romney 2 to 1.

The result of all this is that there is between a 5% and a 10% over-sampling of the polls, and to get an accurate picture of how the election will turn out we need to subtract between 5% and 10% from Obama's poll numbers across the nation.

Election Projection shows the current latest polling on a state by state basis.  They currently say that Obama leads Romney by 303 to 235.  However, we've just seen that we need to adjust the poll numbers.  When you subtract 5% from Obama's numbers, all of the states shown as "Weak Obama" go to Romney.  Even more, we're talking more than 5% (but less than 10%).  That category is "Moderate Obama", and half of those will go to Romney.

And that will give Romney nearly 350 electoral votes.  Here's my map predicting the race (click to embiggen). 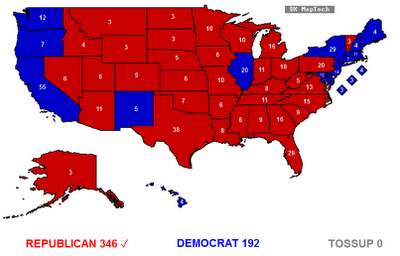 I actually see this as a fairly conservative projection.  It's possible that a preference cascade can occur during the final weeks of the campaign, where voters either flee Obama or decide to stay home in disgust rather than turn out for the Democrats.  Republicans are showing no signs of being turned off by the negative campaign - indeed, people seem to be getting angrier and more motivated as the mud gets flung and the crazy is dialed up to 11.  A R+6 turnout might move all of the Moderate Obama states into Romney's camp.  That would make this the biggest victory since 1988.

Now I may be wrong here, and as I've said before we're probably better off in the long term with a 2012 Obama victory.  However, this is how I see this developing.  You can create your own map, too.  Remember, the interesting discussion is not the result, but your assumptions that drive the result.
Posted by Borepatch

I think you've got Vermont and New Hampshire reversed. Other than that, looks pretty plausible. RCP has CT as leans D, so it might be in play.

That was a better analysis, as in being more realistic and more honest, than the media gives.

I understand your point in saying that in the long run it would be better to have Obama as captain when the ship sinks. But I think that with Obama in command, a lot of us won't be allowed to survive to see that long run.

In my opinion the over-polling is an attempt to determine the number of votes they need to manufacture.

You're a really good thinker, BP, but this stuff: "as I've said before we're probably better off in the long term with a 2012 Obama victory" doesn't fit. Don't let the perfect become the enemy of the good.

I saw very weak turnout in the primaries. I think it's mainly going to be an election between the people on the take and other single-issue voters--both have something to lose if they don't vote.

Unfortunately that means a handful of RKBA-ers, pro-life and pro-empire types versus cities where 25% of the population is on the dole and being bussed to the polls, and enough unionized government workers to form their own country.

TJP: Borepatch's numbers and analysis are sound. You may be right about the one issue voters, but you are ignoring the biggest bloc of one-issuers. That is the dump Obama vote. They did not show up for the primaries because they couldn't vote against Obama in the primaries and the Republican field, at least when it got to my state, was uninspiring to say the least.

The problem is that the primaries represented an opportunity to choose someone that was least like the current occupant of the White House....they chose the candidate most like him. I really don't see any more one-term presidents in our future--the last one was a fluke because of a split vote. There's a lot of anger out there, however as I talk to people I realize it's not directed at the current administration--for the most part it's The Rich[tm], bankers, union workers, health insurance companies, tax assessors, etc.

For every one listed that you don't like, I bet I can find five voters who do like it. This election is going to be about who can get what to the lifestyle-needy of America, and how fast he can get it to them.

Let's see:
According to Conservable Economist, Berry and Bickers agree with Borepatch, while Ray Fair says Obama will squeak by. Interesting article.

The stock market apparently thinks Obama will win too.

I think it will be a tie, and the result will be that I am named absolute dictator, at which point I will ...
I was going to write something very impertinent and funny here, like that I'd ban anchovy pizza or something, but I'm just too tired. You guys will just have to wait until I am crowned.

TJP, never give up, never surrender ...

And I for one welcome our new Olave d'Estanne Overlord! ;-)

I don't think it will be that one sided, but I can hope.

Paul Ryan and Clint Eastwood summed it up and set the tenor for the rest of the campaign.

I don't think that we'll be better off with an Obama victory because the organic damage he'll do to the nation in a second term may be irreversible and irreparable.

At which point those of us who disagree with you will be able to have "We told you so." engraved on our tombstones. If there is anyone left to bury us, that is.

So far it appears you were overly optimistic about the outcome. I still think its going to be close for the whole picture. Though something is not adding up with some of the decisions, like my own Wisconsin.