When America's Elite actually were elite

The Queen Of The World spotted this on Facebook.  I reproduce it here without any commentary because it needs none.

Months after winning his 1941 Academy Award for best actor in “The Philadelphia Story,” Jimmy Stewart, one of the best-known actors of the day, left Hollywood and joined the US Army. He was the first big-name movie star to enlist in World War II.An accomplished private pilot, the 33-year-old Hollywood icon became a US Army Air Force aviator, earning his 2nd Lieutenant commission in early 1942. With his celebrity status and huge popularity with the American public, he was assigned to starring in recruiting films, attending rallies, and training younger pilots.Stewart, however, wasn’t satisfied. He wanted to fly combat missions in Europe, not spend time in a stateside training command. By 1944, frustrated and feeling the war was passing him by, he asked his commanding officer to transfer him to a unit deploying to Europe. His request was reluctantly granted.Stewart, now a Captain, was sent to England, where he spent the next 18 months flying B-24 Liberator bombers over Germany. Throughout his time overseas, the US Army Air Corps' top brass had tried to keep the popular movie star from flying over enemy territory. But Stewart would hear nothing of it.Determined to lead by example, he bucked the system, assigning himself to every combat mission he could. By the end of the war he was one of the most respected and decorated pilots in his unit.But his wartime service came at a high personal price.In the final months of WWII he was grounded for being “flak happy,” today called Post Traumatic Stress Disorder (PTSD).When he returned to the US in August 1945, Stewart was a changed man. He had lost so much weight that he looked sickly. He rarely slept, and when he did he had nightmares of planes exploding and men falling through the air screaming (in one mission alone his unit had lost 13 planes and 130 men, most of whom he knew personally).He was depressed, couldn’t focus, and refused to talk to anyone about his war experiences. His acting career was all but over.As one of Stewart's biographers put it, "Every decision he made [during the war] was going to preserve life or cost lives. He took back to Hollywood all the stress that he had built up.”In 1946 he got his break. He took the role of George Bailey, the suicidal father in “It’s a Wonderful Life.” The rest is history.Actors and crew of the set realized that in many of the disturbing scenes of George Bailey unraveling in front of his family, Stewart wasn’t acting. His PTSD was being captured on film for potentially millions to see.But despite Stewart's inner turmoil, making the movie was therapeutic for the combat veteran. He would go on to become one of the most accomplished and loved actors in American history.When asked in 1941 why he wanted to leave his acting career to fly combat missions over Nazi Germany, he said, "This country's conscience is bigger than all the studios in Hollywood put together, and the time will come when we'll have to fight.”This holiday season, as many of us watch the classic Christmas film, “It’s A Wonderful Life,” it’s also a fitting time to remember the sacrifices of Jimmy Stewart and all the men who gave up so much to serve their country during wartime. We will always remember you!Postscript:While fighting in Europe, Stewart's Oscar statue was proudly displayed in his father’s Pennsylvania hardware store. Throughout his life, the beloved actor always said his father, a World War I veteran, was the person who had made the biggest impact on him.Jimmy Stewart remained in the USAF Reserve following the war, retiring as a Brigadier General in 1968. He was awarded the Presidential Medal of Freedom in 1985 and died in 1997 at the age of 89.-- Ned Forney, Writer, Saluting America's Veterans 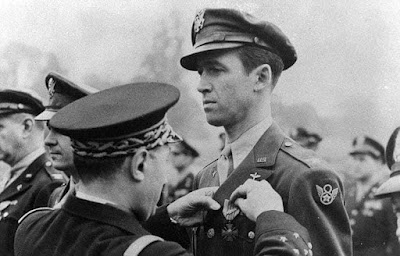 Actually, since this is Borepatch, you know that I can't just shut up and so will tell a personal anecdote about Jimmy Stewart.  On a family vacation to Los Angeles to see grandparents (this would have been probably in 1972, but may have been 1967) we went on one of those Trolly Tours to see the houses of the stars.  They would drive slowly past each of the houses while the tour guide gave a description of the roles and awards each star had.  But at Jimmy Stewart's house the trolly stopped.  The tour guide explained that if Mr. Stewart was home he would typically come to the window and wave.  He did this because everything he had in life came from his fans, and the least he could do is thank them.

I don't recall that he was home that day but the contrast between him and the rest of the Hollywood bunch stuck with me all these years.

Jimmy Stewart was the real thing. His story should be required reading in schools.

Read Jimmy Stewart Bomber Pilot if you want more details. Quite a guy.

I wonder if there is even one person like that in Hollywood today. I ignore celebrities for the most part, as they tend to strike me as clowns.

And there were many more vets in the movie industry in those days.

Glen, the stories about Keanu Reeves are very similar. Even though he never served, his under-the-radar generosity and humility are unique.


"And there were many more vets in the movie industry in those days."

Yes, there were many more back then, but that's because back then, they were on our side.

Sadly, the author of that piece screwed up quite a few simple details, and is essentially hugely embellished writer's fantasy fairytales more than fact.
(FTR and FWIW, Snopes - worth every penny you pay for it - essentially calls the whole story codswallop, in so many words. https://www.snopes.com/fact-check/jimmy-stewart-ptsd-world-war-ii/)

Firstly, Stewart enlisted as a private, the lowest form of military life, not as a lieutenant.
This after being initially rejected for any military service for being underweight. He was skinny long before combat had anything to do with him.
Second, by 1944 he was already flying combat missions, not pushing to get into things.
He had been deployed to a combat bombing squadron since late in 1943.
In all, he flew 20 combat missions over Europe, and rose all the way to full colonel, with service as both squadron commander, and as chief of staff and deputy wing commander before the war's end.
Stories of PTSD are just that: stories. Sources for hi alleged PTSD: almost nil.

And good as It's A Wonderful Life was eventually regarded, it was initially panned, and a box office flop, only finding success decades later due to frequent holiday TV rotation. It was so bad financially it bankrupted Frank Capra's production company.
And whatever role (probably zilch) PTSD played in that part, his movie career was anything but over, nor did that movie revive it. His stage work in Harvey, which he later brought to the screen, did far more to revive his mid-career, and he did most of his best work in the 1930s and the 1950s (his popularity peaked from 1954-56), and he acted all the way to 1980, racking up over 90 films and nearly 50 solid years in the movies, despite the 4-year hiatus for his WWII service.

As usual, the truth about Jimmy Stewart is much better than fiction about him could be.

A bigger star that joined the US military was Douglas Fairbanks Jr, who joined the Navy a few months before Pearl Harbor. Hollywood wanted no part of the war, and very reluctantly made films for the government. They actively worked against any actor that joined the military. Stewart was one of the few that wasn't informally blacklisted for serving, at least obviously. They were all about the money, and worked with Germany as long as possible.
The sad thing was the military didn't like actors serving, any more than Hollywood did, and denigrated their service in uniform.

When men were men.

The list of movie stars from that era who also served during the Second World War is actually quite long. We think of the modern era, and men like Pat Tillman, who volunteered for service giving up a promising NFL career,and eventually losing his life.
It seems that there will always be patriots who will do what is needed to attempt to defend this nation from it's enemies. Time will tell,I believe, it that includes both foreign AND domestic.