It's The Queen Of The World's any my anniversary:

I'm back from the land of no wireless access, which was chosen for that very reason. You see, we've been busy. 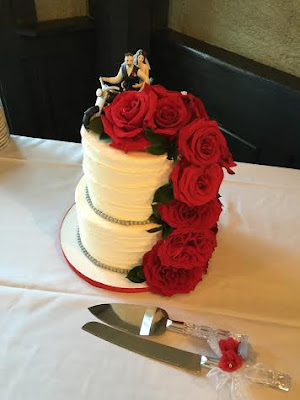 The Queen Of The World and I tied the knot over the weekend.  I wasn't meaning to leave her behind when I move to Maryland at the end of the month, and there was a solution to that problem.  Happily, she said "yes".

The Queen Of The World and I were on a motorcycle trip to the beach. We'd only been dating a few weeks, and she was fun (and pretty as a picture), so off we went.It ended in an accident. The bike went down fast, and hard. I broke a lot of bones and was in the ICU for days. Fortunately the fall didn't hurt her badly.But I was the lucky one, because over the next few days I saw what an extraordinary woman she was. She arranged a rental car and trailer, got the bike loaded, and got the (very drugged up on pain killers) Borepatch home. And then took care of me for the weeks it took me to heal....And so I realized that I hadn't fallen three feet that day, I'd fallen hopelessly in love with an extraordinary woman. Sure she was fun (and pretty as a picture), but she also was fiercely loyal and had a spine of tempered steel. I didn't stand a chance, and quite frankly would have had to have been the biggest fool on earth to let her get away.

So apologies to you, Gentle Reader, for the lack of posting.  But I've been distracted by an extraordinary woman.  No offense, but you play second fiddle to that - I hope you understand.

And so, while I would normally post Christmas music, this one is for my sweetheart, The Queen Of The World.

Labels: music, Queen of the World

An exceptional individual. So early in a relationship and willing to do that, and smart enough to handle it. Don't laugh, a buncha people would have no idea how to resolve those issues. You did find a rare one.

Congrats to you two for finding each other.

Congrats. The wife and I think you're both awesome.

Yer a lucky man man, BP!
I, too, have one of those rare gems in my household, and for that I am eternally grateful.
Value highly your time together, for we do not know the time nor the hour…
Best-

A good wife is a blessing beyond gold and silver.

Keep her happy and so will you be.

Congratulations! And Alison Kraus has a voice like an agel.

So relieved that y'all were off seeing a preacher and not some d*mn doctor. My humble best wishes for you both. May you have many years and few tears.

Yes you are a lucky man, my best wishes to you both.

You are indeed a lucky man, and I think so is your Queen of the World. Have a long and happy life.

Congratulations to you both!

Congratulations! You both have done well in your choice of mate!

You are a very lucky man and congratulations!