The local VFW didn't like this fellow burning their flag. 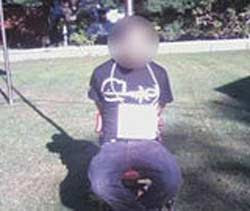 The young man was given three choices: get turned over to the police, go one-on-one in a fight with a seasoned war veteran, or be duct-taped to a flagpole for six hours with a sign around his neck identifying his alleged crime: flag burning.

The young man in question seemingly was turned down at the bar, because he didn't have an ID. Angry, he cut down the Post's flag and set fire to it.

Then he found out the meaning of "a building full of Veterans".

Now before someone starts singing about the young man's First Amendment rights, let me point out two things:

1. He stole their property and destroyed it. They caught him, and gave him the choice of going to jail for theft.

2. As Trace Adkins puts it in his song Fightin' Words, Son, the First Amendment protects you from the Government. Not from me.

UPDATE 28 September 2009 08:17: Welcome visitors from View From The Porch. Take a look around. Good think the young man here didn't run across this soldier, who just got his fifth Purple Heart ...
Posted by Borepatch

Can't get the story link to work.

A pity he didn't chose the one-on-one option...

Jay, it is a pity. Not a surprise, though.

First Amendment guarantees that GOVERNMENT won't come down on you for what you say. It doesn't protect you from having pissed off a bunch of vets for burning something they got shot at and lost friends for.