Heller and the 2008 Election

There is a lot of discussion about Heller and the 2008 election. George Will says that Heller is good for Obama, and takes gun control off the table. Eric Raymond says wait a minute, the 5-4 split was too close, so it's a big issue. In the meantime, we've seen more and more states adopting "shall issue" CCW laws.

I wondered what the baseline electoral college vote total was for gun rights states, so I went to 270toWin and played with their map. Any state with "shall issue" CCW fell into the Red State camp, and all others fell into the Blue State camp. Here's what it looks like: 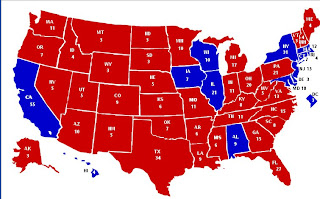 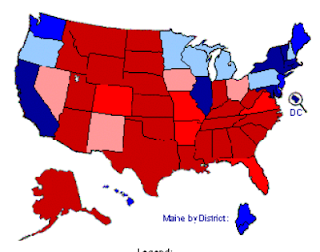 Clearly, there are some obvious failures of the algorithm. Alabama isn't likely to go Blue, even though it isn't (de jure) a "shall issue" state (it seems to be, at least de facto). Washington and Vermont are unlikely to go Red, and New Hampshire and Minnesota seem to the Blue, at least for now (according to Election Projection). Maine may very well split. Obviously, most people aren't single issue voters.

However, it seems like there is a conclusion that we can draw, that there is a base of roughly 350 electoral votes that naturally lean against gun control (currently represented by the Democratic party, despite their efforts to back-pedal). The more energized gun supporters are, the deeper the hole for the Democrats this fall.

How will it play out? Dang if I know. However, a lot of folks seem pretty energized.
Posted by Borepatch